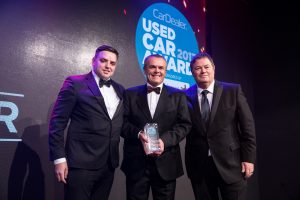 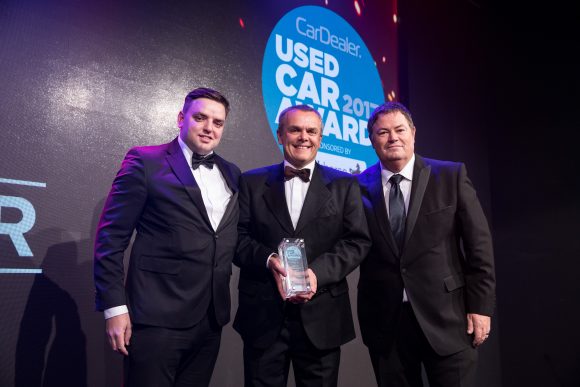 Snow founded Snows Group in 1962, and has left a legacy in the industry with 35 dealerships now carrying his name. Sadly he passed away at the age of 85 in August, but his son Stephen (pictured above with Jem Emirali of Aston Scott, left, and presenter Mike Brewer, right) collected the posthumous award on his behalf.

The group was originally established 55 years ago as an office supplies company but fifteen years later it moved into selling cars. That business now employs more than 750 people and represents 15 brands.

In case you missed it: Our late founder, Geoff Snow, was commended with the Lifetime Achievement Award at the @CarDealerMag #UCAwards last night. We're incredibly honoured – thank you all. pic.twitter.com/4RNolNVyw2

Snow always believed that if customer service was right then the sales would follow and the success of his business has proved this to be right.

His son Stephen said: ‘I’m over the moon, honoured and a little humbled too. It’s great that Car Dealer Magazine has recognised my father and what he founded. It’s fantastic to be acknowledged, and it’s just a shame that he can’t be with us today as he passed earlier this year.

‘It’s very special. I’m honoured to be able to collect it on behalf of my father among people that he would have mixed with and known.

‘I’m very grateful to him, as is all our family and the many people who have worked for Snows Group that we’ve been able to employ.

MORE: #UCAwards – check out our favourite tweets from a memorable night

On SuperUnleaded.com: The six best moments of the 2017 Formula One season