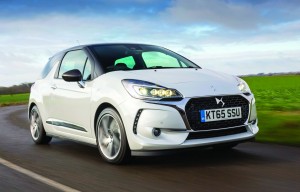 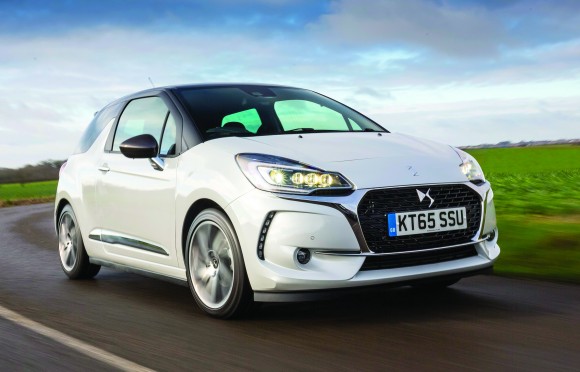 WITH better interior materials and a more premium-looking exterior, is the latest DS 3 any good? Jack Evans tries it out

What is it?
The latest DS 3 builds on the previous model’s reputation by adding more standard equipment and a more premium-looking exterior. Despite using a lot of the previous car’s architecture, it’s a heavily revised car featuring better interior materials and an updated range of engines. DS (which should be pronounced déesse, meaning goddess) is working hard to put its stamp on all its cars, which is why there’s such a heavily redesigned front end and more brand-aware styling touches, such as the logos in the headlamps.

What’s under the bonnet?
We tested the Puretech 130 engine, which is a first for the DS 3. This little three-cylinder unit manages to

produce 128bhp and reach 60mph in 8.7 seconds, which isn’t bad for a small capacity engine. Economy is decent, at 62.8mpg combined, and emissions are respectable at 105g/km. Linked to a six-speed manual transmission, it does well – though diesel engines are offered for those looking for even better economy.

What’s the spec like?
With three core trim levels to choose from – Chic, Elegance and Prestige – there’s something for everyone. Even base trims benefit from air con and alloy wheels. Our Prestige trim had rear parking sensors and an upgraded stereo. There’s larger 17-inch alloys on all four corners, too. Our test car came in at a hefty £21,275, though, putting it perilously close to other more premium rivals.

What’s it like to drive?
Really quite likeable. It’s not meant to be a ‘hot’ hatch – we’ll have to wait for the Performance model for that – so the handling is completely in line with what you’d expect from a little four-seater. There’s a touch of body roll in faster corners, though not enough to trouble the average driver. The engine has enough power for town and motorway, though the steering does have a little trouble settling down when at higher speeds. The ride is just about spot on, while the gearshift’s action isn’t razor sharp but it’s far from the worst we’ve seen.

What do the press think?
Auto Express said: ‘The DS 3 may be six years old, but it doesn’t feel remotely dated to drive, while the visual changes freshen up the exterior look and cabin design nicely.’

What do we think?
With this latest incarnation, it appears DS has done enough to put its own stamp on the car, bringing it more into line with rivals. Although it won’t be long before the DS 3 needs a complete redesign – its main layout has been in use for six years now – this refresh should be enough to bring it back into the public eye, right where it deserves to be.

On SuperUnleaded.com: Utter Madness As A Biker And Motorist Come To Blows