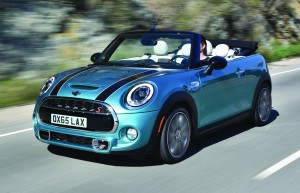 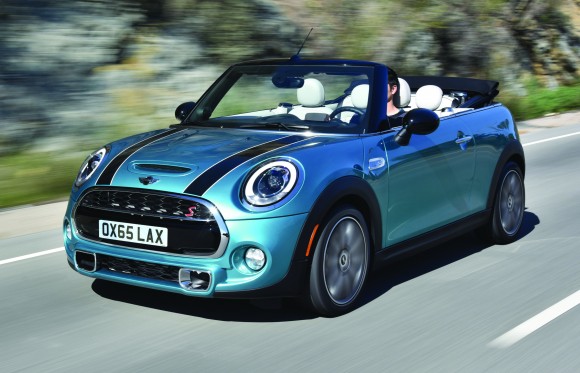 Laura Thomson has fun, fun, fun as she tries the new Mini Cooper S Convertible for size and enjoys its premium feel plus bigger boot space.

What is it?
This is the third, and arguably most practical, generation of the Mini Cooper convertible. It is based on the same platform as the three-door hatch and shares the same drivetrains, and while the soft top may not be suited to the British climate, its timeless style and reliability will ensure that it remains in position as the UK’s top-selling convertible.

What’s under the bonnet?
It will be available with a variety of the German car-maker’s trusted drivetrains. We tested the front-wheel S convertible, which boasts a 192hp, two-litre four-cylinder turbo engine. Capable of 0 to 60mph acceleration in 7.0 seconds, the Cooper S tops out at a modest 143mph. Power is transferred to the road via a six-speed manual transmission, although a six-speed Steptronic is also available.

What’s the spec like?
As with the previous model, the rear view is extremely limited when the roof is down and only improves marginally when the roof is up. However, the generous wing mirrors more than make up for this and a capable reversing camera ensures that all angles are covered. It retains the popular ‘Openometer’ – now called the ‘Always Open Timer’ – which measures for how long the roof has been open in the car’s lifetime.

The interior quality has been improved over the previous guise, giving the cabin an overall premium feel. The most significant improvement, however, is the increase in space. Rear passengers are afforded more headroom, while the 25 per cent increase in boot capacity means that two small suitcases can fit comfortably side by side.

What’s it like to drive?
The Cooper S is significantly more powerful than its standard sibling, and definitely more fun. Flick it into Sport mode and it becomes even more so, with ‘Maximum Go-Kart feel’ flashing up on the centre console – a promise that doesn’t disappoint. The plentiful power is matched by the car’s grip on the road, and the firm steering lends a sense of security when travelling at high speeds.

Lift off the accelerator and not only will the rev-matching function kick in, but extra pops will come from the exhaust as well. The fabric roof can be raised or lowered at speeds of up to 18mph, and can sit in either an open, closed or semi-retracted position. The former wouldn’t be advised on motorways however, as despite the wind deflector – now much easier to install and remove than previously – the cabin is somewhat gusty and noisy.

What do the press think?
AutoExpress says: ‘There’s a new champion for those who love the cheeky Mini image and want the feel of the wind in their hair. The convertible is more sophisticated than ever, with high-quality fittings, increased space, a better canvas roof and plenty of on-board technology. Mini hasn’t forgotten the fun factor, though.’

What do we think?
A sporty, capable soft top, the Mini Cooper S Convertible is a lot of fun both to drive and to look at. It may not win awards for its boot capacity in the B segment, but this has vastly improved on the previous model and now matches that of the three-door hatch.

On SuperUnleaded.com: Utter Madness Unfolds As A Biker And A Motorist Come To Blows