Home > News > Hypocrites! The ministers still in thrall to diesel 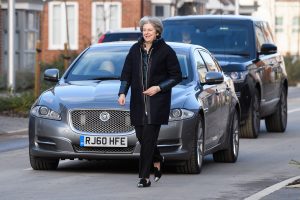 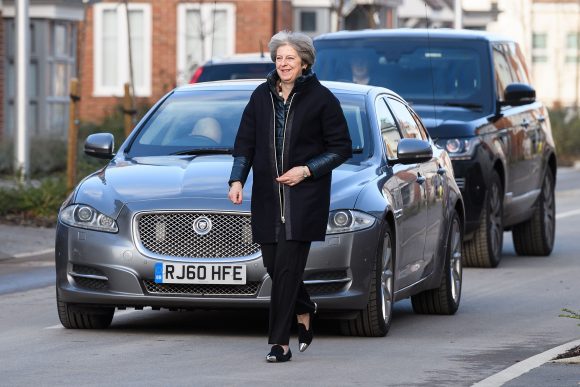 Hypocrites! The ministers still in thrall to diesel

MORE than half of the cars used by government ministers – including the prime minister Theresa May and the chancellor of the exchequer Philip Hammond – are diesels.

Despite the government’s increasingly anti-diesel rhetoric, and just over a month before new road tax rules are set to penalise diesel drivers further, the government still has a fleet of luxury cars powered by the fuel.

A Freedom of Information investigation by Car Dealer Magazine found that of the government’s pool of 84 ministerial vehicles, 49 are still diesel-powered.

Six electric Nissan Leafs, 21 Ford Mondeo petrol hybrids and a hydrogen-powered Toyota Mirai – leased last year – also form part of the fleet used by ministers. How often they are used and by whom wasn’t revealed, and research by the Car Dealer team could find hardly any pictures of ministers being driven in these alternatively fuelled cars.

He told Car Dealer: ‘When 49 out of the 84 cars used to chauffeur ministers are still diesel-powered, the government isn’t exactly practising what it preaches. 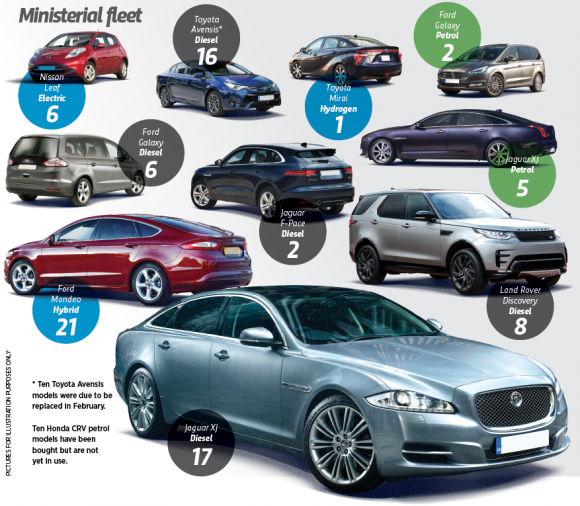 ‘You can’t pontificate on diesel car pollution and then be driven home in one. And why, out of those 84 cars, are only six electric?’

Car Dealer Magazine founder James Baggott added: ‘When the government has waged a war on diesel car buyers, quite incorrectly so, it’s staggering to learn that 58 per cent of the fleet used by ministers – including the chancellor who has been leading the battle – are still diesel-powered.

‘Perhaps the government’s fleet buyers know what we all do – that diesel is often the right choice for a lot of buyers.

‘These mixed messages are damaging the car industry, and educating car buyers about choosing the right fuel for them must be at the forefront of ministers’ minds instead.’

Car Dealer also asked the government for a breakdown of which cabinet members used what cars, but the request was denied for ‘security reasons’.

The government said: ‘We have decided not to disclose this information because it could be used, coupled with information already in the public domain, by someone intent on committing a crime or act of terrorism.’

Car manufacturers and dealers reacted with anger when the chancellor hiked road tax for all new diesel models in the Autumn Budget.

Instead of incentivising buyers to swap to more efficient and cleaner new diesels, the move effectively put buyers off changing – leaving many heavily polluting models still
on the road.

Some manufacturers have launched diesel scrappage schemes, but there are calls from the industry for a wider, government-backed initiative to entice buyers of heavily polluting older diesel cars into cleaner, new alternatives.

We asked Mike Hawes, the chief executive of industry body the Society of Motor Manufacturers and Traders, for his comments. 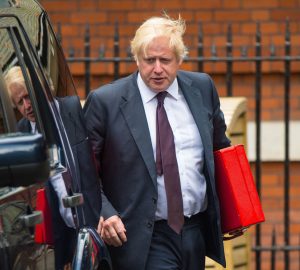 In light of the government’s continued attacks on diesel and the harm it is doing to the industry we expected a strong response.

However, he simply said: ‘Government will have a set of policies around vehicle procurement that address environmental, industrial and security issues. Diesel vehicles continue to be a popular choice for many drivers thanks to their high performance, lower fuel consumption and lower CO2 levels.’

Jonathan Bartley, co-leader of the Green Party, was far more vocal. He told Car Dealer: ‘As if we needed it, this is conclusive proof that the government will talk the talk but not walk the walk on tackling the country’s toxic air.

‘The revelation that more than half the journeys taken by MPs are in diesel vehicles is damning. The government is working hard to green-wash its reputation, not clean up our dirty air. If the environment secretary is serious about tackling this public health emergency, he would get polluting vehicles off the streets of our towns and cities and introduce a targeted diesel scrappage scheme. A good first step would be ditching the government’s own dirty diesel fleet.’

The government has committed to buying more petrol, hybrid and electric models – and has said 25 per cent of cars in its fleet will be ultra-low emission by 2022. In its response to Car Dealer, the government said: ‘The prime minister told Parliament in January 2017 that the Government Car Service is working to remove diesel vehicles from its fleet. These vehicles are being replaced as they become due for renewal with fit-for-purpose non-diesel alternatives that take into consideration operational requirements.’ 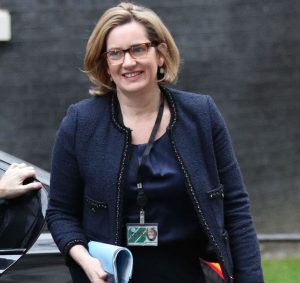 The government said that 10 of the 16 diesel Toyota Avensis models listed in the Government Car Service were due for renewal in February. However, it didn’t reveal what models would replace them.

Not yet operational were 10 petrol-powered Honda CRVs, which haven’t been included in these figures.

AA president Edmund King added: ‘In recent months we have had anti-diesel rhetoric, targets for banning the sale of new diesels and diesel tax increases.

‘We have also seen a plethora of local authorities hiking parking charges for diesels.

‘There are probably good and valid reasons why more than half of the government fleet is diesel, just as there are good reasons, often based on previous government advice and tax incentives, as to why 43 per cent of drivers have diesels. The difference is that drivers don’t tell government what cars they should drive.

‘We are aware and totally understand why the prime minister and certain ministers have armoured, custom-built Jaguar XJ Sentinel supercharged 5.0-litre V8 models.

‘However, sometimes it appears that politicians follow the doctrine of ‘‘do as I say, not as I do’’.’

MORE: Sale of diesel-powered cars fell by 25 per cent in January, according to SMMT

MORE: The carmakers ‘with blood on their hands’ over dieselgate

On Workshop Magazine: Temporary traffic lights cause drop in trade for Stoke garage