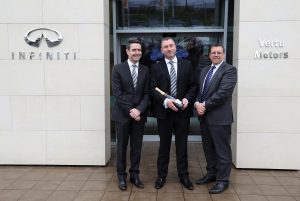 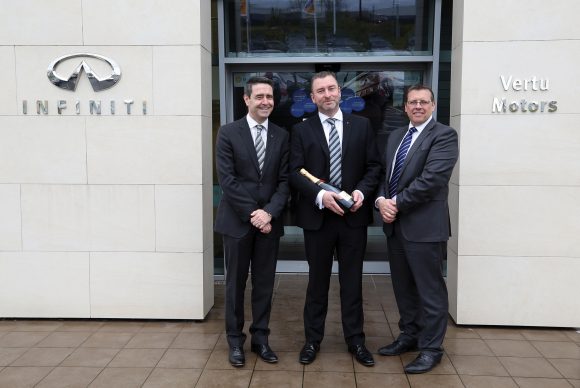 INFINITI’S Newcastle centre has been honoured for its customer service.

The Vertu Motors dealership was named by the luxury vehicle division of Nissan as one of five top-performing centres in Europe for its dedication and for providing the highest standard and bespoke service to its customers.

The team at the showroom on Silverlink Business Park, near Wallsend, Tyne & Wear, led by centre manager Jeff Aynsley, picked up the Best Customer Experience Award from Infiniti regional director Barry Beeston, who said: ‘To win this award takes a lot of commitment and desire to be the best and I am pleased to see that Jeff and the team here in Newcastle, located so close to the Sunderland factory, has done so well, not just with the highest score in the UK but also coming in the top five for the whole of Europe.’

Vertu Motors chief operating officer David Crane, who was also at the ceremony, said: ‘The continued success of Infiniti Centre Newcastle is evidence that Vertu Motors’ emphasis on providing customers with a personable but professional and knowledgeable service is paying off.’

Aynsley thanked his team for their hard work, saying: ‘I’m very proud that the dealership has secured this accolade. The team here work hard to ensure they have an intimate knowledge of every vehicle in the Infiniti range so that they can answer any queries customers may have.’

MORE: Infiniti breaks sales records in first half of 2016

On SuperUnleaded.com: NASCAR Race Is Red-Flagged After Mega Pile-Up