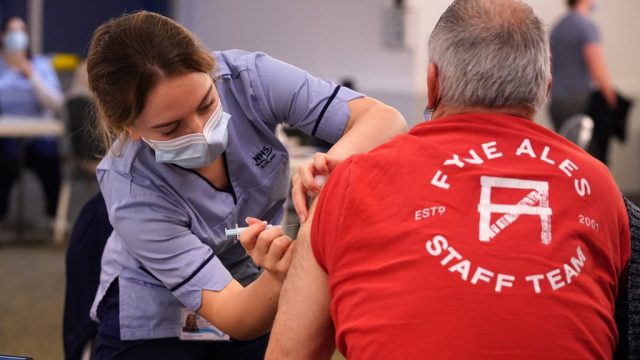 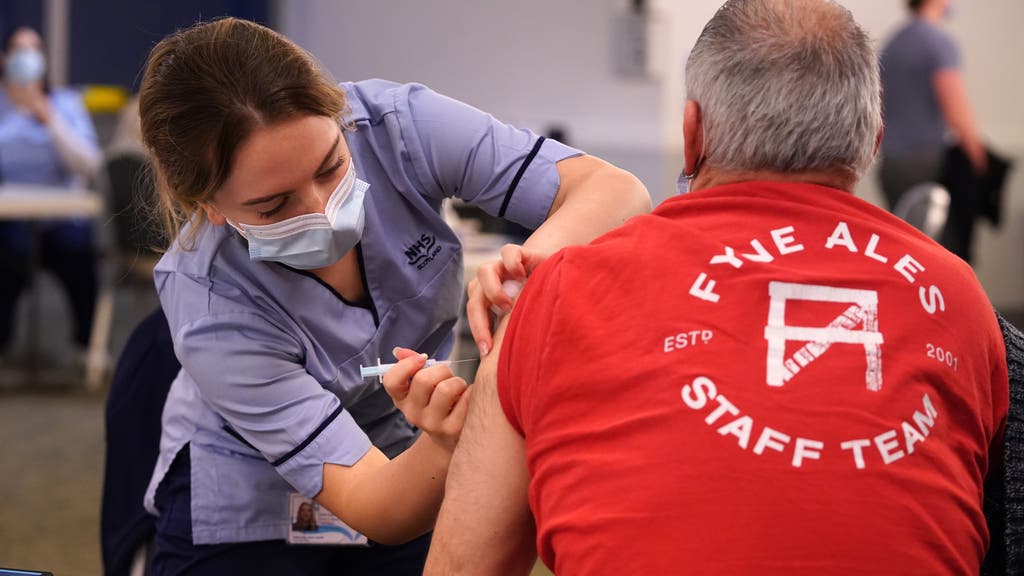 Vaccine boosters are 90 per cent effective against admission to hospital from the Omicron variant for the over-65s, according to new figures.

The figures, from the UK Health Security Agency, show that level of protection three months after the over-65s had received the booster.

Meanwhile, protection for those with two doses dropped to about 70% after three months and to 50% after six months.

House prices increased by more than £24,500 on average in 2021, marking the largest annual cash rise since 2003, according to an index.

Property prices hit new record highs eight times last year, according to its monthly index, despite the impacts of the coronavirus pandemic.

But house price growth is expected to slow considerably this year, the report added.

Drakeford calls out England as ‘global outlier’ in Covid fight

England is a ‘global outlier’ in the fight against the Omicron wave of coronavirus because of its anti-restrictions stance, Wales’s First Minister has said.

At a Welsh Government press briefing on Friday, Mark Drakeford once again aimed a blistering attack at Boris Johnson.

Asked to justify the continuation of restrictions for another week following the Welsh Government’s weekly review, while neighbouring England remains rule-free, the First Minister said: ‘The outlier here is not Wales. Wales is taking action, as is Scotland, as is Northern Ireland, and as are countries right across Europe, and right across the globe.

‘The one country that stands out as not taking action to protect its population is England.’

Workers at Sainsbury’s and Argos are to receive a pay rise under a £100 million investment in staff.

Basic hourly pay for store employees will increase by 5.3 per cent, from £9.50 to £10 an hour, in recognition of the ‘extraordinary work’ they do for customers.

Tributes have been paid to Hollywood star Sidney Poitier after his death at the age of 94.

The Bahamian-American actor was known for films including In The Heat Of The Night, Blackboard Jungle and Guess Who’s Coming To Dinner – and was the first black man to win the Oscar for best actor.

The Prime Minister of the Bahamas paid tribute to him as ‘a cultural icon, an actor and film director, civil and human rights activist and a diplomat’ and said the national flag will fly at half-mast across the country and its embassies.

Jeffrey Wright, Whoopi Goldberg and Joseph Gordon-Levitt were also among those paying tribute.

Strong end to first week of trading in 2022

A strong afternoon session helped the FTSE climb into the green to end a broadly positive first week of trading in 2022.

London’s top index had been in negative territory until around 2pm but pushed on later in the day as positivity among traders particularly buoyed banking and commodity stocks.

A carer from Cornwall whose family was supported by a food box company when the pandemic affected his working hours is now raising money for his local food bank – by dancing to Toto’s Africa for 24 hours straight.

Dean Pascoe said he and his family were ‘struggling’ when a friend brought over food boxes after Covid had shortened the father-of-three’s working hours.

Pascoe has now raised more than £1,200 on GoFundMe for Camborne, Pool and Redruth (CPR) Food Bank while he prepares for a day of non-stop dancing and nearly 300 loops of Toto’s classic pop hit.

Widespread heavy frost across Scotland will make ice a major problem in the early hours of Saturday while the rest of the UK is forecast to see low temperatures for a wet and windy weekend.

Friday night saw a Yellow Weather Warning for ice put in place for Scotland and parts of southern England and Wales- with some areas seeing as much as 11cm (4.3in) of snow.

And the threat continues, particularly in Scotland, where there remains a high chance of ice patches throughout the country.