Friends and families will be reunited and team sports will resume in a major easing of England’s coronavirus lockdown to allow far greater freedom outdoors.

Groups of up to six, or two households, can socialise in parks and gardens once more, while outdoor sports facilities can reopen after the stay-at-home order ended today.

Boris Johnson stressed that ‘we must remain cautious, with cases rising across Europe and new variants threatening our vaccine rollout’, while warm weather was expected to accompany the relaxation. Restrictions were eased as official figures showed more than 30m people in the UK have received a first vaccine dose, accounting for about 57 per cent of all adults.

Passenger fares will match those made in petrol, diesel and hybrid Uber vehicles, while drivers will be charged a reduced service fee. Journeys must begin within London’s Zone 1 area but destinations are unrestricted.

Hauliers arriving in England to be tested for coronavirus

Hauliers travelling to England from outside the UK for visits lasting more than two days will be tested for coronavirus, the Transport Secretary has announced.

Grant Shapps said that from April 6 hauliers, including drivers and crew of heavy goods vehicles and vans, will need to be tested within 48 hours of arriving and then every three days.

Announcing the news on Twitter yesterday, he said: ‘This is to ensure we keep track of any future Coronavirus Variants of Concern.’

Home working is here to stay and the end of the five-day-a-week office commute will change the shape of cities dramatically, according to former Bank of England deputy governor Sir Charlie Bean.

Sir Charlie has become the latest prominent figure to declare that the traditional, office-based working week is over as he predicted firms will adopt a permanent flexible model after the pandemic.

‘Not everyone will be working a nine to five, five days a week and that, in effect, will change the way metropolises like London operate,’ he said. ‘We won’t have rigid commuting times… we’ll see an evolution of the city to reflect that.’

The stricken ship blocking the Suez Canal was ‘partially refloated’ in the early hours today, according to a canal services firm.

Leth Agencies said the modest breakthrough came after intensive efforts to push and pull the MV Ever Given with around 10 tugboats while vacuuming up sand underneath the ship with several dredgers at high tide.

Leth was unable to immediately provide further details about when the vessel would be entirely set free, saying it was awaiting confirmation of the partial refloating from the Suez Canal Authority. More than 320 ships are now waiting behind the blockage.

A group of golfers greeted the easing of England’s coronavirus restrictions by hitting the fairways at just after midnight.

Seven teams used glow-in-the-dark balls and floodlit greens at the Morley Hayes Golf Club, near Derby, with their opening drives coming at 12.01am.

Golf is among the outdoor activities which can now take place in England, with courses allowed to reopen along with football and cricket pitches, tennis and basketball courts, and outdoor swimming pools.

Sunday’s headlines you may have missed

Campaigners call for ‘Shop Out to Help Out’ scheme

Retail campaigners are calling for an Eat Out to Help Out-style scheme to boost the tills of beleaguered independent shops after they finally reopen on April 12.

The campaign group Save The Street, backed by fretail expert Mary Portas, have called on Chancellor Rishi Sunak to support the sector by offering customers 50 per cent off the cost of goods at independent retailers up to a price of £10.

They suggest such a scheme could run for one month this summer with discounts available to shoppers from Monday to Wednesday only, and limited to independent enterprises with fewer than 10 employees that sell through physical stores.

Vaccine passports would be ‘the last straw’ for pubs

Wetherspoon boss Tim Martin has said vaccine passports would be ‘the last straw’ for struggling pubs and force bar staff into a ‘bitter civil liberties war’ with customers.

Writing in the Telegraph, Martin said ‘there is no justification for a passport system’.

The chairman of the pub chain said: ‘For many pubs, hanging on for dear life and devastated by G-force changes of direction, a complex and controversial passport scheme would be the last straw. It would inevitably put pub staff in the frontline of a bitter civil liberties war, with some customers unwilling to be vaccinated or unable to have a jab for medical reasons.’

More than 41,000 venues have outdoor space for April 12 reopening

More than 41,000 pubs, bars and restaurants have some kind of outdoor space which could allow them to reopen on April 12, according to new figures.

The latest monthly Market Recovery Monitor by CGA and AlixPartners has revealed that 38.2 per cent of licensed premises in the UK say they have space to allow them to trade.

Firms have said they will plan to utilise gardens, terraces, car parks and other areas where they can potentially seat guests to reopen when outdoor hospitality is given the go-ahead in the next phase of the Prime Minister’s road map. 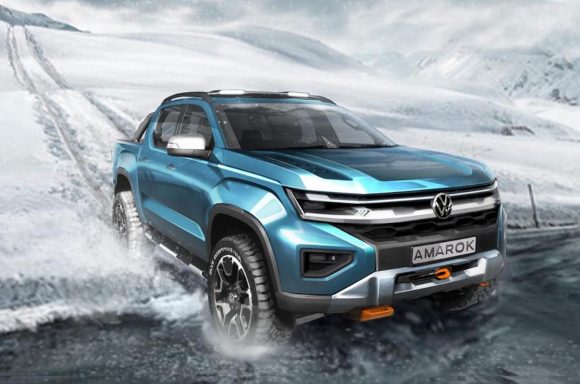 VW has given a hint as to what its upcoming Amarok successor will look like in a new drawing.

Showcased as part of Volkswagen Commercial Vehicles’ annual conference, the new pick-up truck – which is expected to arrive on the market next year – will be jointly developed with Ford, following the pair’s alliance that was announced in 2019.

The sketch showcases a completely new look for the truck, with an imposing front end utilising a large grille section that blends into the headlights. Much like the older Amarok, the new version incorporates body-coloured wheel arches and tubular sections in the rear bed.

Rain will persist across north and west Scotland, with rain heavy at times today says the BBC. Mainly dry across England, Wales and Northern Ireland, with increasingly sunny skies this afternoon, and very warm.

Rain will continue to persist tonight across northwest Scotland, accompanied by some strong gusty winds for a time. Largely dry and clear across England, Wales and Northern Ireland.

Tomorrow will be an exceptionally warm day; likely the hottest day of the year so far for many. Lots of cloud and further rain in northwest Scotland.