Keeping car showrooms closed costs the Treasury £61m every day, according to the SMMT.

It published the figure today as it declared the automotive industry is ‘ready to return to work’.

It calculated that the amount of tax revenue lost from every additional day showrooms are closed is worth £20m, while furloughing the sector’s 590,000 retail workers under the job retention scheme has an estimated daily cost of £41m. Read the full story here.

Comment: Now’s the time for clarity and get Britain moving again

Car dealers still don’t know if they’ll be allowed to reopen on June 1 alongside other non-essential retail businesses.

In a comment piece today, Car Dealer Magazine founder James Baggott explains why now is the time for clarity for car dealers as they ramp up to get ready for reopening. Read the full piece here.

Increase in employment in areas despite lockdown

Some parts of the UK have seen a surge in employment despite the overall impact on jobs of the coronavirus crisis, new research suggests.

Job adverts have increased in recent weeks in rural communities in areas such as South Norfolk, Omagh and Moray, said the Recruitment and Employment Confederation.

Roofers and security guards are among professions with increased demand, as well as staff for the NHS. The largest weekly falls were reported in the South West and North West.

Former Sainsbury’s boss Justin King has said he is ‘optimistic’ about the future of high streets with social distancing measures in place – but he has warned of a tough period ahead.

King said he believes customers and retailers will quickly adapt to changes on high streets caused by the virus.

He said: ‘People will continue to walk down the high street safely and choose to go into stores that look safe or quiet. I’m optimistic about the high street.’

£1,000 fines for travellers that fail to quarantine

International travellers could face spot checks and £1,000 fines if they fail to self-isolate for 14 days after arriving in the UK under measures to guard against a second wave of coronavirus.

Home Secretary Priti Patel is expected to outline the plans – which will be introduced early next month – at the daily Downing Street briefing today, a senior government official confirmed.

Exemptions for road hauliers and medical officials will apply, while the common travel area with Ireland will be unaffected. Arrivals from France will not be exempt, the official confirmed, following confusion earlier this week.

Heavy machinery giant JCB has reached agreement on a new working pattern designed to safeguard up to 915 jobs.

The company said negotiations with the GMB union over more flexible working arrangements would help hourly-paid shop floor workers across its UK operations.

The company said it expects disruption caused by the coronavirus pandemic will continue in the coming months while the move does not affect the planned 950 salaried staff redundancies announced last week. 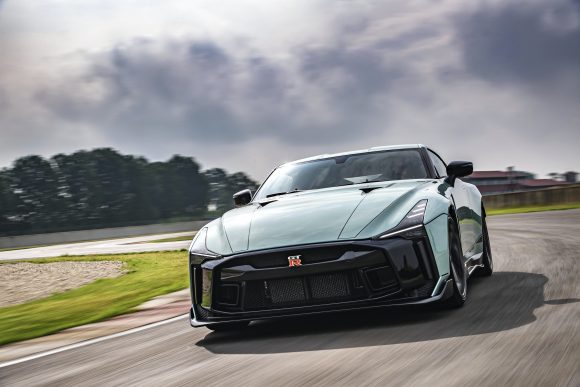 A heavily-modified Nissan GT-R, which has been overhauled by an Italian design studio, has entered production ahead of customer deliveries beginning later this year.

Called the Nissan GT-R50 by Italdesign, it’s based on the top-tier GT-R Nismo and will be limited to just 50 examples. It has been built to celebrate the 50th anniversary of the GT-R badge and Italdesign.

The standard GT-R Nismo starts from £175,035, but the Italdesign upgrades rocket the price to £883,000 before taxes and options.

Clarks has said it plans to cut 900 office jobs as part of a major shake-up.

The 195-year-old British firm said it has announced 160 redundancies globally, including 108 job losses at its headquarters in Street, Somerset. The retailer said it expects that roughly 700 employees will leave the business over the next 18 months.

Clarks said the move is intended to help the company operate in a ‘lean, effective and quick manner’.

Half of Facebook’s workforce could shift to permanent home working by the end of the decade, founder Mark Zuckerberg has said.

The social network’s chief set out his vision yesterday, prompted by the current crisis which has forced companies across the globe to embrace remote working.

Zuckerberg said it is ‘quite possible’ that over the next five to 10 years 50 per cent of staff at the company could be working from home, though he warned those interested could see salaries cut if they are located away from big cities where living expenses tend to be higher.

KFC and Burger King to reopen at motorway services

Dozens of KFC, Burger King and Starbucks outlets are to reopen at motorway service areas over the next two weeks.

Welcome Break announced that 40 food and beverage units will resume operations across its 26 UK sites by June 4. Thirty-two of the outlets have already reopened in recent days.

Motorway service areas have remained open during the coronavirus pandemic to support essential travel, but facilities have been limited.

Passengers could be prohibited from travelling on Tube trains and buses in London without face coverings, Sadiq Khan has said.

The capital’s mayor revealed he hopes to persuade the government to change its position on the issue, but he has the option to ‘make it mandatory in London only’.

Existing guidance from Transport for London only goes as far as advising passengers to wear face coverings. Khan told the London Assembly: ‘Next week I’ll be considering whether I need to use the option I’ve got to make it mandatory.’

On the Beach launches £67m fundraiser

On the Beach will tap up shareholders for up to £67m as part of plans to help the package holiday firm emerge stronger from the crisis, the company said.

The online package holiday firm said it would be placing new shares onto the market, for current and new corporate investors, as it added airspace being closed until the end of September has ‘become increasingly plausible’.

The company added it expects to take a hit of £35m from cancelled bookings, as it processes refunds – although this will be classed as a ‘material exceptional charge’ in accounts.

London’s top shares took a tumble on Thursday as a bad day for British banks was largely offset by a good showing for the country’s airlines.

EasyJet to resume flights from June 15

EasyJet is to resume flights from a number of UK airports from June 15. The low-cost carrier announced that its initial schedule will involve mainly domestic flying in the UK and France.

Further routes will be confirmed ‘over the coming weeks’ as demand increases and lockdown measures across Europe are relaxed.

Two of Britain’s biggest listed car sellers were doing well in the first months of 2020, until the coronavirus pandemic forced their shops to close.

Inchcape boss Stefan Bomhard said yesterday that the company had a strong start to the year, as he warned that activity will be ‘subdued’ even after the business opens up again.

Pendragon warned that the slow-down will cost it around £10m in underlying profit before tax as it reported a pre-tax loss of £2.3m for last quarter, around £500,000 better than the same period last year, despite the Covid-19 crisis. Read our full reports from yesterday on Pendragon here and Inchcape here.

Is it safe to visit car dealers now? The huge steps motor trade is taking to make showrooms safe ahead of reopening tomorrow

TrustFord chairman: Let’s get back to work before making knee-jerk reactions

Guide: The crucial difference between reserve-and-collect and click-and-collect