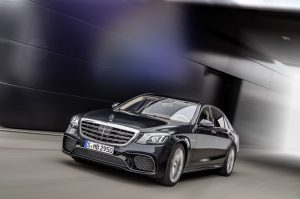 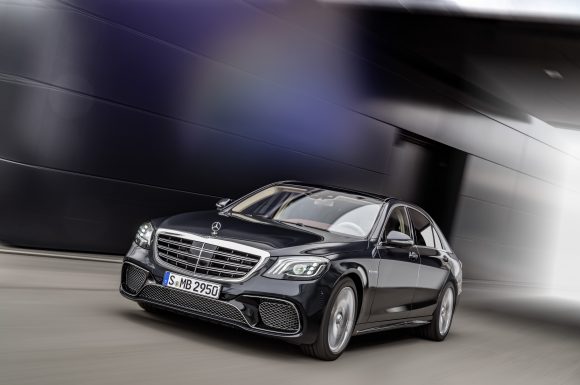 MERCEDES’ new S-Class and Concept A saloon made their debut at the Shanghai Motor Show today.

Ola Källenius, Daimler AG board member responsible for group research and Mercedes-Benz Cars development, said: ‘The development of the new S-Class was extremely extensive. With a whole series of new features and functions the S-Class remains the technological pioneer.’

Due to arrive in European markets in July, the latest S-Class, pictured above, benefits from two new diesel powertrains in the form of the S 350 d 4Matic and the S 400 d 4Matic. The latter is available with two output levels – 282bhp and 335bhp. 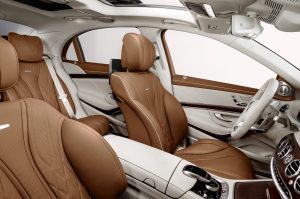 Inside the Mercedes S-Class

Two petrol engines are also available – a S 560 4 Matic and S 63 4Matic+. The S 63 4Matic+ produces 603bhp, but thanks to cylinder deactivation technology, the turbocharged 4.0-litre V8 is capable of offering significantly better economy figures than the naturally aspirated 5.5-litre V8 found in the previous-generation car.

A range-topping S 65 still remains, powered by a 6.0-litre biturbo V12. It produces 621bhp and 1,000Nm of torque, and has been visually updated, too. Mercedes is also planning a plug-in hybrid version of the S-Class capable of driving around 30 miles on all-electric power.

Autonomous technology plays a bigger part in the new S-Class as well. Distronic Active Proximity Assist automatically uses maps and navigation to adjust the vehicle’s speed based on the current route. If it senses that a sharp bend is ahead, for instance, then the car will automatically reduce its speed. 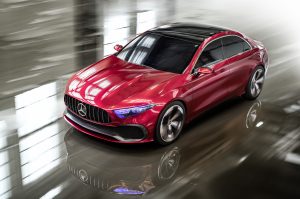 The Mercedes-Benz Concept A saloon

Mercedes also lifted the lid on its Concept A saloon. Designed with coupe-like looks, it rides on large 20-inch alloy wheels, while its door handles are flush with the body, ensuring that its elegant lines remain uninterrupted.

The headlamps feature a grid structure coated in UV paint. These are then exposed to ultraviolet light, and can be made to ‘glow’ in different colours depending on the type of light that they are lit with.

Gorden Wagener, chief design officer for Daimler AG, said: ‘Our Concept A shows that the time of creases is over. With its perfect proportions and a sensual treatment of surfaces with reduced lines, it is the next milestone of sensual purity and has the potential to introduce a new design era.’

The rear of the car features a section designed to recreate the look of a diffuser, with this area trimmed in black and chrome. Two integrated exhausts sit on either side. A large panoramic glass roof has also been fitted, allowing more light into the cabin, while dark tinted windows work to protect the privacy of those inside.

Mercedes-Benz Concept A Sedan: The next milestone in the Mercedes-Benz design philosophy of Sensual Purity. #AutoShanghai pic.twitter.com/1SkoPBk2D0