Home > News > New car sales up by 11.3 per cent in July thanks to pent-up demand lifting the market

New car sales up by 11.3 per cent in July thanks to pent-up demand lifting the market

New car sales rose by 11.3 per cent in July it was announced today (Aug 5) by the SMMT – as revealed on Monday by Car Dealer after it saw preliminary figures.

Figures published by the trade body revealed that 174,887 cars were registered in July 2020, which the SMMT said was a significant improvement on July 2019, which saw falling business and consumer confidence undermining the market.

Mike Hawes, SMMT chief executive, said: ‘July’s figures are positive, with a boost from demand pent up from earlier in the year and some attractive offers meaning there are some very good deals to be had.

‘We must be cautious, however, as showrooms have only just fully reopened nationwide and there is still much uncertainty about the future.

‘By the end of September we should have a clearer picture of whether or not this is a long-term trend.

‘Although this month’s figures provide hope, the market remains fragile in the face of possible future spikes and localised lockdowns as well as, sadly, probable job losses across the economy.

‘The next few weeks will be crucial in showing whether or not we are on the road to recovery.’

The biggest growth was enjoyed by private sales, with a 20.4 per cent increase in registrations, mainly because people could at last renew their cars after being forced to delay by lockdown.

Manufacturer incentives helped attract customers to showrooms, with eight of the 10 major manufacturers giving attractive finance offers and flexible payment terms in an attempt to head off consumer uncertainty, which the SMMT said was vital as the Coronavirus Job Retention Scheme is phased out and potentially sparks nationwide redundancies, affecting confidence to invest in big-ticket purchases.

However, overall registrations were still down by 41.9 per cent (598,054 units) in the year to date, and the SMMT expects a 30 per cent fall in registrations for the year – more than £20bn of lost sales.

ASE Global chairman Mike Jones appeared on Car Dealer Live this morning (Aug 5) in a special broadcast to talk about the figures as they were released.

He said: ‘Looking in detail at the numbers it’s interesting to see the rise in retail – the majority of the growth is in retail sales, which reflects customers’ pent-up demand during the lockdown period and slowly being released.’

He added: ‘Overall on the July number it’s clearly a good news story and we should be celebrating that, but July is not the biggest month. Last year it made up just over half of the total number of registrations that we did in September.

‘It’s a good story that we’re there and there were some significant increases among some of the brands, but we do need to make sure that we build that pipeline for September, because that’s the most important month as we go through the remainder of this year.’

You can see his interview in full by clicking on the main image.

Meanwhile, speaking on BBC Breakfast, Ford of Britain managing director Andy Barratt called for government support, saying: ‘We are the only market out of the big five European markets that doesn’t have a stimulus package from any government intervention.’

What Car? managing director Rachael Prasher told the BBC the new SMMT figures were good news, but said the fight back by the industry had only just begun.

‘This is very welcome news to the UK’s automotive sector and a testament to all the hard work put in to kickstart the industry by dealers and manufacturers as lockdown eased.

‘After nearly three months of closed doors, it is great that the industry has demonstrated its remains so robust.

‘However, with this month’s success driven largely as a result of pent-up demand and lease cycles there is still much hard work to do ahead.’

People’s appetite for zero- and ultra low-emission cars stayed stable, with plug-in hybrids and battery-electric vehicles taking a nine per cent share of registrations, compared with 9.5 per cent last month and up from 3.1 per cent for 2019 overall.

Superminis and small family cars were again the most popular segments, grabbing 59.1 per cent of registrations. Dual-purpose cars comprised 25.9 per cent of the vehicles registered. 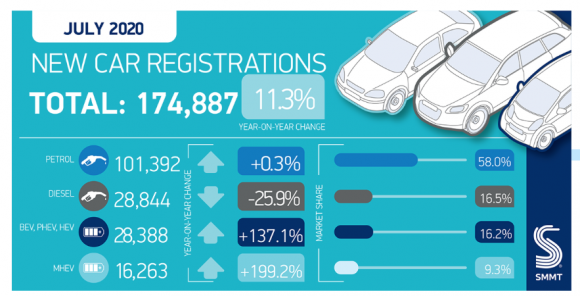 More than 13,000 jobs have now been lost across retail and manufacturing in the automotive industry as a result of the pandemic and more are likely to follow, said the SMMT, because of the scale of the challenges faced by the sector, including shifts in technology, Brexit uncertainty and a depressed market.

Dealerships across the UK were forced to shut in late March because of the coronavirus pandemic, but they gradually reopened in June, with England leading the way on 1st, Northern Ireland following on 8th, Wales on 22nd and Scotland on 29th, meaning July was the first full month since February that all showrooms across the UK were open.

Since December 2019, there had been a decline in the new car market: down 7.3 per cent in January and 2.9 per cent in February, then things really took a tumble as the pandemic struck and showrooms closed, with a 44.4 per cent drop in March, a whopping 97.3 per cent decline in April, and a 89.0 per cent fall in May.

June’s figure of 145,377 was a 34.9 per cent drop, so July’s figure would seem to echo the belief of many that there has been pent-up demand just waiting to be unleashed.

New car registrations down 34.9 per cent in June, as dealers across UK slowly get back to work

New car registrations for May down by 89 per cent