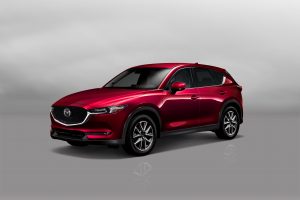 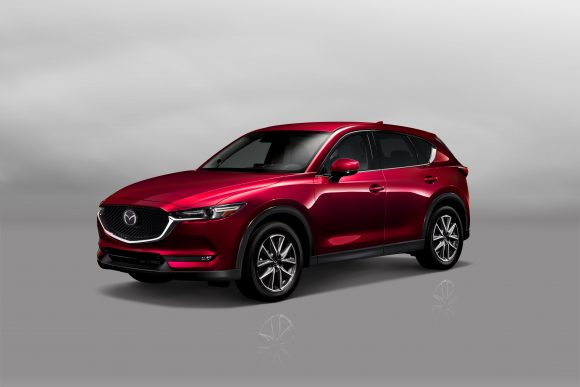 MAZDA has pulled the wraps off its new CX-5 and with it debuted a new bold, more premium look that will spread across the brand’s models.

At the launch of the new SUV at the LA motor show this week, the firm’s UK managing director Jeremy Thomson said the car was ‘a stepping stone’ to the next generation of Mazdas.

‘The CX-5 is a very important car for Mazda,’ he explained. ‘It’s not just a facelift of a car that came out in 2012, but it hints at a design language that will flow through all our cars in the next few years.

‘We have one of the freshest product line-ups in the industry and we will shortly launch a seventh generation of Mazdas in the UK and this CX-5 gives a very good look at where we are going.’

The new CX-5 has a bold new grille – that at first glance could have been borrowed from the Jaguar F-Pace – smoother lines and sharp new lights. It is due to arrive in showrooms next summer and is likely to help increase sales from its current 9,000-a-year UK tally.

‘The CX-5 is hugely important to Mazda in the UK,’ added Thomson. ‘The C SUV segment has been growing for many years. When CX-5 arrived in 2012 it was relatively late into the evolution of that segment but my word has it made an impact – we have not even had to advertise the car on TV since its launch.

Mazda have unveiled the new CX-5 ahead of the LA Motor Show. It’s very red. pic.twitter.com/5dK6XN4k0L

‘We have attracted the highest number of premium customers to Mazda with the CX-5 too. BMW, Mercedes and Audi owners swapped their cars for a CX-5 and I think that was down to its attractive running costs and decent specification. I can see this new model continuing that and helping increase sales.’ 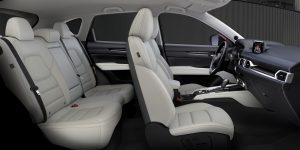 Inside the all-new Mazda CX-5

But does it look different enough? ‘I think it was always a very handsome car so it would have been a mistake to change it too much,’ said Thomson. ‘In key areas there are significant improvements. For me the front grille is dramatic and assertive and points very much to future Mazda design, which is exciting.’

Other highlights for the new model include a new ‘Soul Red Crystal’ paint, reduced road noise in the cabin and a new head-up display. Prices have yet to be released but will be ‘competitive and reflect the improvements’, added Thomson.

MORE: Move to new HQ is a major turning point for us, says Mazda MD

On SuperUnleaded.com: Here’s What To Expect If you Attend The Grand Tour Filming