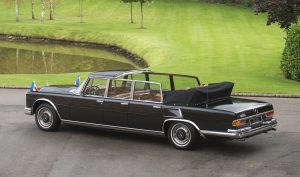 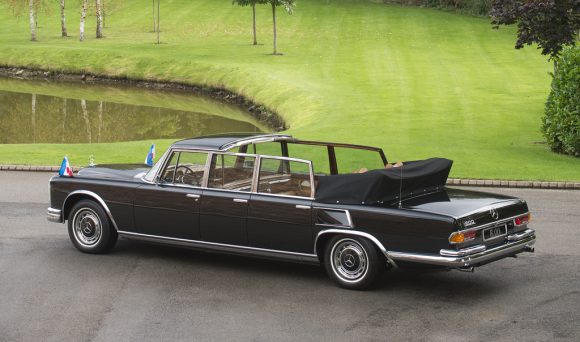 IF you’ve ever felt like emulating some of history’s most famous heads of state, Derbyshire specialist car dealer Tom Hartley Jnr has the perfect car for you.

The Mercedes-Benz 600 – sometimes referred to as the Grosser (or ‘Grand’) – was created to be the very best luxury car in the world, and managed it with such aplomb that it quickly became the vehicle of choice for presidents, monarchs and dictators worldwide.

As the first ever Mercedes vehicle to be fitted with a V8, the limousine was the height of decadence and came in many forms. There was the ‘regular’ four-door car, a long-wheelbase, six-door dubbed the Pullman, and Landaulet versions (fixed roof at the front, convertible at the rear) of both. The 600 Pullman Landaulet was the car that conveyed the ruling elite through the crowds, with owners including Idi Amin, Enver Hoxha and Nicolae Ceaucescu.

Only nine of these behemoths were built with a retractable roof over the entire rear passenger compartment, to create the long-roof ‘Presidential Landaulet’. This particular model, featuring black paint with a cognac interior trim, was owned by president of Yugoslavia Josip Tito from 1971 until 1980.

After Tito’s ownership, the car was bought by collectors in Norway and Germany, before ending up in the UK.

Tom Hartley Jnr told us: ‘I’ve known the car for many years. It belonged to a very good client and a well-respected collector based in the UK.

‘I’ve always been in love with the car. It’s a very significant and very important car – all of the Landaulets are, and only nine of them were built in the long roof, six door configuration. Of those nine, this is probably regarded as the most original, the most unmolested car and it also has great provenance.’

Befitting the Tito heritage, this example comes complete with two original Yugoslavian flags with chrome flag staffs, two original license plates used by Tito and a selection of Tito memorabilia. This is in addition to relatively standard features like a vanity set (including electric shaver and perfume bottles) and a microphone plug in the rear.