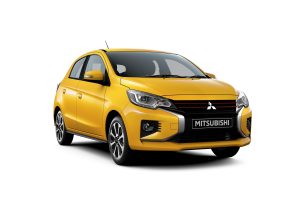 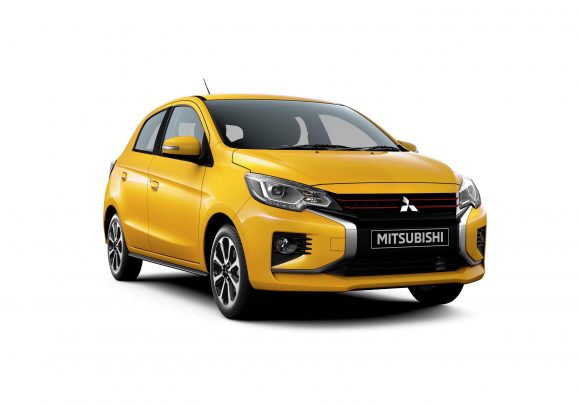 MITSUBISHI has given its Mirage hatchback a fresh set of tweaks ahead of 2020.

Initially introduced in 2012, the most notable change to the refreshed Mirage is the introduction of Mitsubishi’s corporate front fascia. Chrome strakes flank a blacked-out grille, with two red horizontal stripes sitting either side of the badge.

Reshaped headlamps have been introduced, while the rear of the car sees a squared-off bumper brought in in a bid to give it a ‘wider and more stable look’.

Rounding out the visual changes to the car is a set of fresh 15-inch alloy wheels, while customers can now opt for two new colours: White Diamond or Sand Yellow.

Inside the car, a new armrest has been thrown in while cloth has been used on the previously exposed plastic ‘hand-touch’ areas. A carbon fibre-effect pattern has been added around the window switch panel, with a combination of fabric and synthetic leather upholstery introduced too.

A new touchscreen infotainment system has also been introduced to the car, featuring support for both Android Auto and Apple CarPlay.

No word on any new powertrains for this iteration of the Mitsubishi Mirage as yet, so it’s fair to assume it will retain the existing car’s 1.2-litre, naturally-aspirated petrol engine with the option of a five-speed manual or CVT gearbox.

Pricing and specifications for the new Mitsubishi Mirage will be revealed in early 2020, with its arrival in showrooms likely to follow shortly after.

MORE: Autonomous vehicles on the road by 2030, says Mitsubishi Electric

MORE: Renault and Dacia to replace Honda and Mitsubishi at Stoneacre’s Mushroom Garage