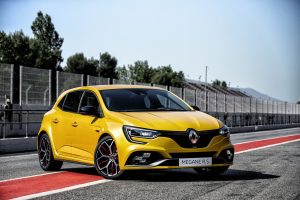 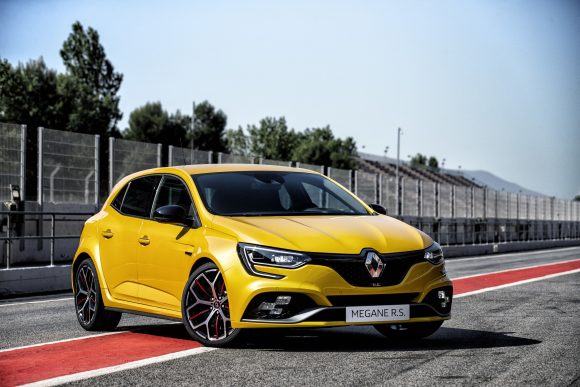 THE Renault Megane R.S. is already something of a performance beast, but the French firm has taken it a step further with a more focused version — the Trophy.

The car is equipped with a 1.8-litre turbocharged engine producing 296bhp and 420Nm of torque — up from the 276bhp and 390Nm that the standard car boasts. It can be paired with either a six-speed manual gearbox or six-speed dual-clutch automatic transmission, and the result of all this power is a 0-60mph time of 5.5 seconds, and a top speed of 162mph.

Inside the car, Recaro bucket seats now feature on the options list, which are trimmed in Alcantara and sit 20mm lower than previously.

There’s little in the way of external visual indication that this is a Trophy, aside from stripes added to the F1-inspired front splitter. You will be able to hear the difference, however, thanks to an upgraded exhaust system that features a mechanical valve — allowing the car to be set sociably quiet or arrogantly loud.

Fans of Renault’s hot hatches will be familiar with the Trophy moniker, which has been applied to the most potent version of each Renaultsport-fettled Megane since the first was introduced in 2004.

The new Renault Megane R.S. Trophy is set to go on sale in the autumn, with customer deliveries beginning in the last quarter of the year. Pricing has yet to be confirmed but expect to hear more on that shortly.

MORE: Groupe Renault sees 9.8 per cent sales rise in first half of 2018

MORE: New Dacia Duster gets extra kit – but the price goes up

On WorkshopMagazine.co.uk: SMPE ready to join line-up of exhibitors at AutoMechanika Frankfurt