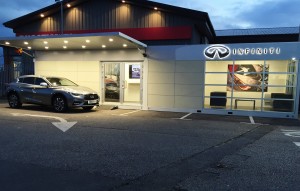 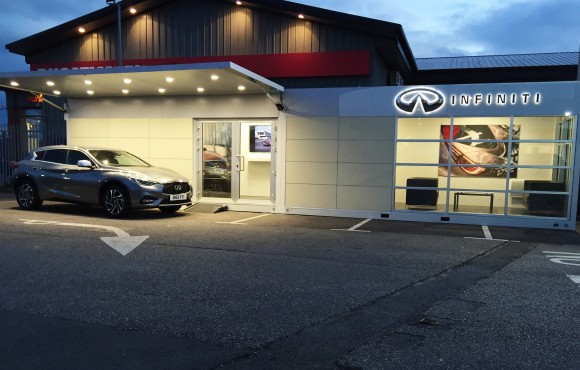 INFINITI is introducing a chain of ‘short-usage’ showrooms across Europe to allow new centres to start operating while their main facility is under development.

Capitalising on the introduction of three new products being introduced this year, 12 bespoke 28 square-metre showrooms have been constructed to accommodate the opening of new centres across Europe. The first has already been deployed in Bristol, with more due to appear across Europe in the coming weeks.

François Goupil de Bouillé, Infiniti vice president for Europe, the Middle East and Africa, said: ‘We have been overwhelmed with interest in the Infiniti Q30.

‘The short-usage showrooms are an ideal way of sharing the Infiniti Q30 and the rest of the range with as many people as possible in locations where a permanent Infiniti Centre is yet to open. It is a typically innovative Infiniti initiative.’

Visitors to the short term showrooms will be able to see and experience the Q30 and its many features, arrange a test drive and use iPads to configure their ideal specification in a unique augmented reality display. They will also be able to explore the premium brand and the rest of the model range on a big screen.

The innovative retail initiative comes at a time of rapid growth for Infiniti and in the middle of a product offensive that is seeing more new cars and a wider spread of premium Infiniti models than ever before.

The all-new Q30 premium active compact has been on sale since the start of the year. At the upcoming Geneva Motor Show the brand-new sports coupe Q60, the premium active crossover QX30 and the upgraded Q50 will be making their European premieres.

Goupil de Bouillé continued: ‘I am confident that with so many daring and exciting new models and initiatives like our new showrooms, Infiniti in Europe will continue to set further new sales records in the months to come.’

MORE: CDX: We can’t wait to be involved, says Carwow