Home > News > Sporty version of Kia Stonic could be on way 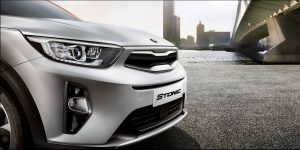 Sporty version of Kia Stonic could be on way

A SPORTY version of the new Kia Stonic SUV looks highly likely to join the line-up as the manufacturer looks for more ways to attract youthful buyers to its brand.

Kia’s UK chief Paul Philpott has said the hard work of establishing the manufacturer in the UK is now complete and it can now look to exploit its position with more exciting, niche models.

Coming later this year will be the Stinger sports car – a car Philpott believes will find around 2,000 homes in the UK – and that’ll be closely followed by a succession of exciting models.

Philpott said: ‘The Stonic design lends itself to the potential for sporty offerings. Look at what Nissan has managed to do with the Nismo Juke. It’s a viable option.’

The Stonic SUV is targeted with taking the fight to the segment-leading Nissan Juke, which clocks up more than 40,000 sales a year. It is unlikely to undercut it on price, though, with the Stonic expected to start from around £15,000. Philpott says it won’t topple the market leader either.

‘We won’t sell more than the Juke,’ he explained. ‘Next year in its first full year on sale we expect to sell between 8-10,000 Stonics. Kia is known for great SUVs like Sportage, Sorento and Soul and Stonic will build on that in one of the biggest segments of the market.

‘However, we are not planning on selling more than the Juke. Stonic is not built in the UK, it’s built in Korea, and I want to be conservative with estimates. When we introduced Sportage we expected 23-25,000 sales a year and now sell 40,000 a year. I would rather have an order bank for Stonic than end up distress selling.’

Yellow @Kia_Motors Stonic takes centre stage here at the unveiling. Like it? pic.twitter.com/SL98rdBgmk

Philpott insists that Kia is not too late to the party with the introduction of its B-segment SUV offering.

He said: ‘We’re well placed to build on our success in the SUV sector which has been built with Soul, Sportage and Sorento. The B-segment SUV market is growing and this model will help us establish the Kia brand even further.’

On SuperUnleaded: 5 Outstanding Onboards To Watch During Your Lunch Break