Home > News > Super Sara is queen of the Welsh forests 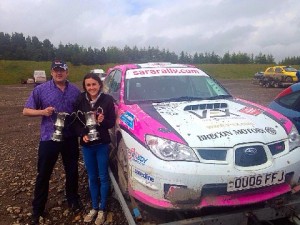 Super Sara is queen of the Welsh forests

SARA WILLIAMS, fresh from her success as a speaker at the Car Dealer Conference & Expo, went back to the day job – and chalked up a sensational victory in Wales.

Sara spoke at the Women in the Motor Industry session at our Silverstone event, and came away with a host of new admirers.

And at the weekend she cemented her status as an icon of British rallying as she won the 2015 Red Dragon Rally by 1min 21sec.

Sara and her co-driver, Patrick Walsh, navigated 36 stage miles in less-than-ideal conditions, coming out on top after a faultless day of driving and teamwork. This success marked Sara’s third win overall in a rally event, after she famously became the first female driver to win a rally outright for 30 years in 2013.

In addition, Sara and Patrick won the Nick Bradbury Award for fastest final stage time, capping a perfect weekend for the team.

The Red Dragon Rally was organised by Port Talbot Motor Club – which is celebrating its 50th anniversary this year – and the event headquarters were at the Walters Arena Complex in Neath, near Swansea.  The Red Dragon 2015 comprised five stages, with two separate courses being combined to create a demanding test of gravel surfaces through the famous Welsh forests.

MORE: Ford’s new models will be able to see round corners…