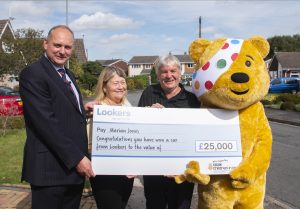 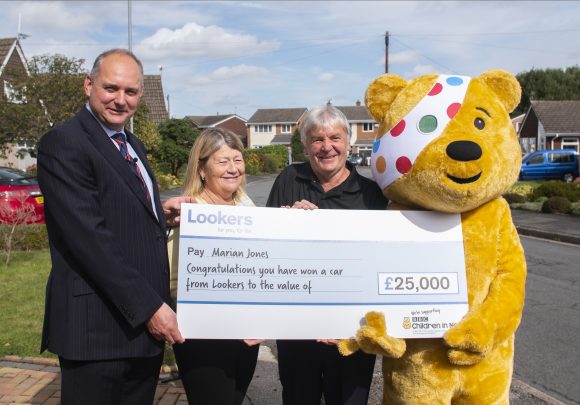 A TEACHER from north Wales has won a new car to the value of £25,000 after entering a prize draw at a Lookers dealership.

Marian Jones, from Deeside, Clwyd, entered the draw at Lookers Vauxhall Chester to help the business raise money for Children in Need.

But she never expected to be greeted on her doorstep by representatives of the company along with the charity’s mascot Pudsey!

Marian entered the draw by donating to the charity when she bought her last car and is now looking forward to revisiting the dealership to choose her newest set of wheels as well as personally thank everyone involved in the draw.

‘I’m absolutely stunned to have won the Lookers prize draw,’ she said. ‘I was a bit taken aback when I saw Pudsey Bear on my doorstep, but once I realised I’d won the draw I was over the moon.

‘As a teacher I have a great appreciation for the vital work that Children in Need do, so I was more than happy to contribute to Lookers’ fundraising appeal. I now can’t wait to visit Lookers Vauxhall again to choose my new car and thank everyone.’

The prize is one of two cars that Lookers has given away, with the second winner, train driver Simon Clements of Morpeth, recently surprised with his £25,000 voucher after entering the draw at Lookers Nissan Gateshead.

The prize draws form part of a huge fundraising effort at Lookers, with the group pledging to raise £600,000 for Children in Need. Fundraising is continuing thanks to customer donations and a number of events across its dealership network.

Mark Starling, general manager at Lookers Vauxhall Chester, said: ‘I would like to congratulate both Marian and Simon for being chosen as the lucky winners of our prize draws.

‘Children in Need is a charity that has become an important part of our fundraising activities over the past year.

‘We look forward to welcoming Marian and Simon through our doors once again to help them choose their new car.’

In our picture, Mark Starling, left, presents Marian and Ken Jones with their grand prize alongside Pudsey