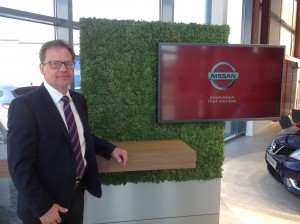 A LEADING privately-owned car dealer group in Scotland has expanded its Nissan franchise network by opening a new showroom in Dunfermline.

Eastern Western Motor Group has acquired an old dealership site at Crossgates Road, in Halbeath, and is currently turning it into a state-of-the-art Nissan showroom.

Set to open in late September or early October, it will create up to 20 jobs and will be the family-run group’s second new Nissan dealership to open this year after Western Nissan in Stirling was launched in April.

Significant investment was made to convert the former furniture warehouse at Springkerse Trade Park into a new Nissan showroom, but there is a long-term plan to open a purpose-built dealership nearby.

Neil Johnson, dealer principal of both Nissan franchises in Stirling and Dunfermline, said: ‘It’s a great time to be with Nissan. It’s the fastest-growing brand in the UK and the product range is one of the best in today’s market.

‘The only way is up, so it was an easy decision by Eastern Western Motor Group to invest heavily in the franchise. We look forward to opening in Dunfermline and introducing the brand to even more customers in the area.’

The new Dunfermline dealership will have Nissan’s 21st-century showroom concept, with technology and creature comforts combined to enhance the overall customer experience.

The concept, which was developed in the UK for roll-out globally, replaces the traditional sales-focused showroom. It centres around a comfortable and stylish area where customers can enjoy a freshly brewed coffee while they take in all the latest offers and deals.

Visitors to the new-look dealership will also find an open-plan layout without traditional sales and service desks, a ‘halo’ display hanging above star models and displaying key product information, and an iPad station where customers can surf the web.