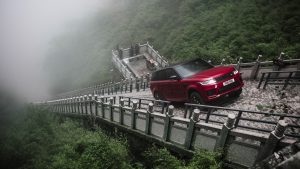 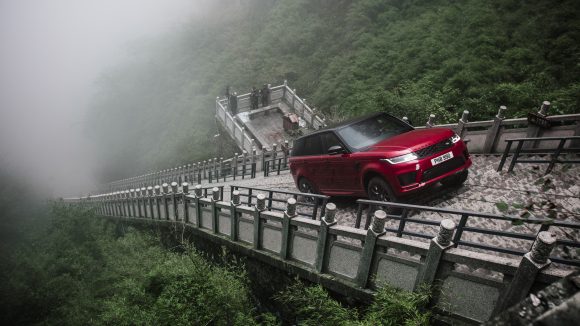 LAND ROVER has scaled one of China’s toughest mountains using nothing more than a showroom-spec version of its latest high-performance SUV.

The Range Rover Sport PHEV is the first vehicle to reach the Heaven’s Gate landmark top of Tianmen Mountain, having first taken on a treacherous seven-mile road – known locally as Dragon’s Road – before climbing 999 steps and navigating 99 turns to reach its final destination.

Not a single modification was made to the vehicle, with the showroom-ready SUV simply utilising the Terrain Response 2 system to reach the top – piloted by Formula E driver Ho-Pin Tung, of Panasonic Jaguar Racing.

Ho-Pin Tung said: ‘I’ve experienced Formula E, Formula 1 and won at the 24 Hours of Le Mans but this was without doubt one of the most demanding driving challenges I’ve ever faced. The Range Rover Sport PHEV performed brilliantly as it inspired real confidence on the mountain road and climbed the stairs up to Heaven’s Gate effortlessly.’

Phil Jones, Land Rover Experience expert, said: ‘This was the hardest Range Rover Sport challenge I’ve ever been involved with because, until we reached the top, we couldn’t categorically say we would succeed. By making it to the summit, we’ve proven the phenomenal capability of the Range Rover Sport plug-in hybrid like never before – with a genuine world first.’

It’s the not the first time Land Rover has used its vehicles to take on daring challenges. The firm took on the Pikes Peak hill climb in 2013 using a petrol Range Rover Sport, setting a record time for production SUVs.

The Range Rover Sport PHEV, for which UK order books are now open, is powered by a hybrid drivetrain consisting of a four-cylinder petrol engine and an 85kW electric motor. It develops a total of 398bhp and 640Nm of torque, capable of taking the car from 0-60mph in 6.5 seconds and up to a top speed of 137mph.