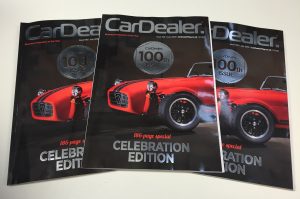 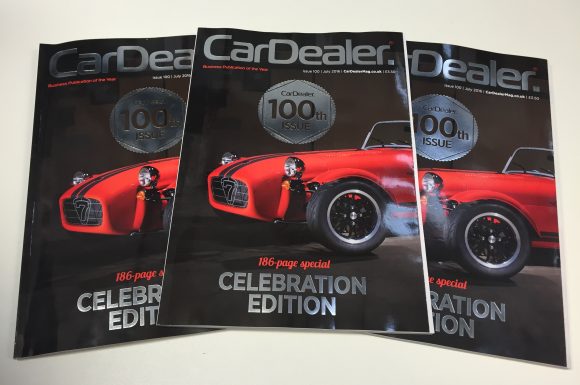 ARRIVING with you this week will be the 100th issue of Car Dealer Magazine, writes James Baggott.

And before you disappear into the many, many pages we’ve produced, know that we’ve been working 100 times harder than normal to pack it with so much you won’t need another one for at least a few months. Well, that’s what I’ve told the team anyway, as they’ve been burning the midnight oil putting this one together, our biggest issue ever published.

Obviously that’s a lie and in four or, depending on production editor Dave’s mood, 4.1 weeks’ time, you’ll have another. But for now, let me tell you a little bit about what’s beneath the chocolate-coated surface this month – Jammie Dodger-style, this magazine is packed with goodness.

Planning for this monster started several months back with an ideas session that Alan Partridge and his ‘Monkey Tennis’ blue sky thinking would have been proud of.

The ideas that came, and quickly went, were wacky to say the least. But that doesn’t mean we haven’t been ambitious with our plans – and by ambitious I mean more so than ever before.

First up we tasked Andrew ‘I Love A Good Spanner’ Evans with building a car in 100 hours. OK, we’re not talking a Ford Fiesta as, quite frankly, he’d fail hideously at that. No, this one is designed to be built in 100 hours, and comes in lots of handily-labelled cardboard boxes. 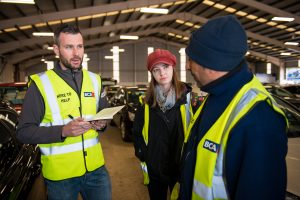 The Car Dealer team spent a day at BCA Blackbushe

How I laughed when Caterham unloaded box after box into our lock-up.

To mark our 100th issue we wanted a special survey – so we asked you what your favourite cars were to sell of all time. We rang hundreds of dealers while hundreds more filled in our online survey, giving us a definitive Top 100 list of your favourite models to shift from your showrooms.

To celebrate, we got the top 20 together for a very special photo shoot at a positively torrential Rockingham Motor Speedway. Thanks to the unbelievably damp conditions, our cover shot didn’t go quite to plan – which is why you won’t see it on the cover – however, the feature did.

We’ve loved talking to dealers like you about why they love selling these cars and our winner is not exactly surprising. Take a guess at what it is, then see where your choice finished in our Top 100 list.

Next up in our 100-themed special is a trip to BCA. We wanted to sell 100 cars in 100 minutes so Team Car Dealer headed to the firm’s flagship auction house at Blackbushe and tried not to get in the way too much while the firm made it happen. It was fascinating to watch the car-selling machine in action and I even got to smash the gavel down on at least one of those 100 cars. Find out if we managed to do it without causing too much chaos in issue 100.

And finally, I’ve embarked on an ambitious project to trade up as many cars as I can from a £100 starting stake in aid of Great Ormond Street Hospital. You may remember a while back I took on a similar task aiming for a Porsche 911. Well this time I’ve set no specific car target, however, like all good journalists should have, I’ve got a deadline.

The plan is to see just how far I can get in 100 days then cash in and hand over the proceeds to GOSH. Find out how my challenge has begun. Oh, and if you fancy helping out and being part of this fundraising task, get in touch – I need all the help I can get.