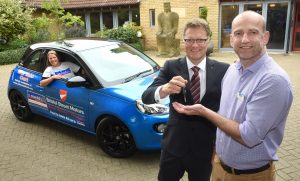 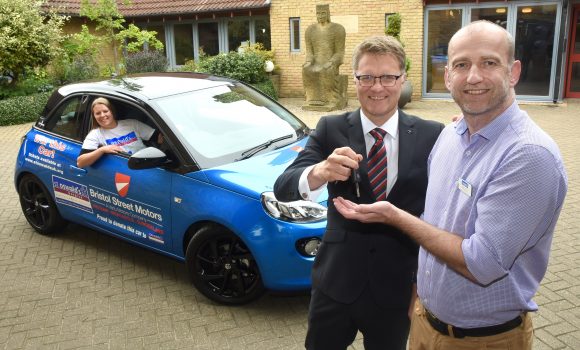 BRISTOL Street Motors dealerships in the north-east are joining forces to raise funds for a local good cause.

The company’s Vauxhall sites in Hexham, Newcastle and Sunderland have teamed up to donate a brand new five-seater Adam to St Oswald’s Hospice in Gosforth. The car will be the star prize in the charity’s annual raffle.

Proceeds from the draw, which will be made at the hospice’s Christmas market in November, will contribute towards the charity’s annual £7million fund-raising target. Runner-up prizes include a £500 laptop donated by Total Business Group and a £300 holiday voucher from Courtney Airsavers.

This is the fourth year that Bristol Street Motors, which is operated by Vertu Motors, has donated a car to St Oswald’s Hospice’s raffle. The charity, which is celebrating 15 years of its children’s service this year, will use the money raised to fund its services, which support adults and children with life-limiting illnesses and their families.

Robert Forrester, CEO of Vertu Motors, said: ‘Thanks to the efforts of its amazing staff and many dedicated volunteers, St Oswald’s Hospice carries out invaluable work, 365 days a year. Without it, hundreds of patients and families would not have the help or support to get through what is an extraordinarily difficult time.

‘We are thrilled to continue what is a successful relationship with St Oswald’s Hospice, and were more than happy to donate another car to feature as the main prize in its annual raffle.’

James Ellam, chief executive of St Oswald’s Hospice, added: ‘We are extremely grateful for the ongoing support from Vertu Motors and the teams at Bristol Street Motors in the north-east.’

On WorkshopMagazine.co.uk: New bonus shop gifts set to be added to Repxpert