Cazoo made reduced profit of £2m in the first three months of the year despite the fact the firm’s revenue rose by close to 160 per cent, accounts have shown.

Figures published in the online disruptors financial results for Q1 of 2022 show that the retailer turned over £295m in the three month period ending March 31.

The figure represents a rise of 159 per cent when compared to the same period last year and has been driven by improved sales.

Despite the success, gross profit did fall from the same period last year with the firm making £2m compared to £4m in 2021.

Gross margin also dropped from 3.3 per cent to just 0.5 per cent, the figures show.

The news comes as the online specialists continue to expand throughout Europe having launched in Germany, Spain and France. 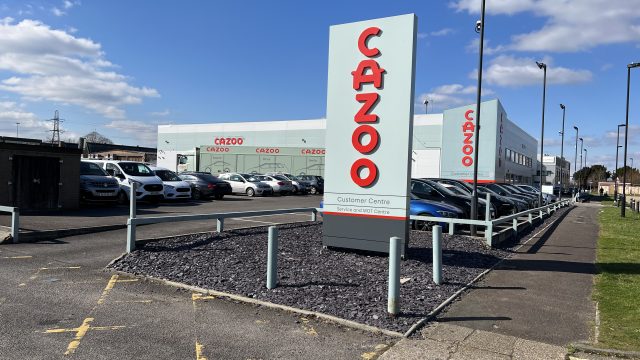 In aiming to built the brand’s presence, bosses have splashed out on becoming the main shirt sponsor of several European football clubs including Lille, Freiburg and Marseille.

Reacting to the results, controversial boss, Alex Chesterman, remained bullish. He said: ‘I am extremely pleased with our record Q1 revenues and unit sales as we are starting to see the benefits from the significant strategic steps that we took during 2021.

‘We achieved over 50 per cent sequential quarterly growth in retail units sold in the period, driven by increased inventory available on our website, supporting our thesis that increased reconditioning output leads to greater sales.

‘As we advance through 2022 we aim to continue to ramp up our reconditioning capacity which we expect to lead to further growth and allow us to continue our progress towards our long-term market share ambitions.

‘This strong acceleration in growth comes despite a rapidly changing macroeconomic backdrop in our markets. While we are very mindful of the wider macroeconomic uncertainties, we remain laser focused on the execution of our strategy as we continue to make progress against our previously detailed expectations for the year.

‘We expect any macro headwinds to be transitory in nature and remain extremely excited by the enormous market opportunity for Cazoo and are very confident in achieving our long-term growth and margin targets.’

That was despite the company increasing the number of vehicles sold, revenue and profit per unit.

The loss for the year without adjustments was a staggering £550m, according to the group.

Car Dealer also produced a special programme about the company, which can be viewed above, or on YouTube.

Reacting to the latest financial results, Stephen Morana, chief financial Officer of Cazoo, added: ‘I am encouraged by the progress we have made in Q1, significantly increasing our revenue by 159 per cent year-on-year driven by strong UK retail sales.

‘As previously detailed, our Q1 UK retail GPU was impacted in the short term from investments made in the second half of last year with the launch of our car buying channel and bringing our UK reconditioning in-house.

‘We expect a significant improvement in our UK Retail GPU in Q2 and throughout the rest of the year as we start to see the benefits of these investments.’