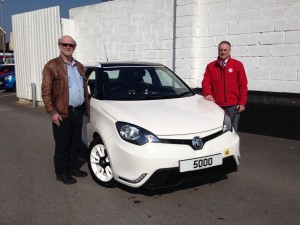 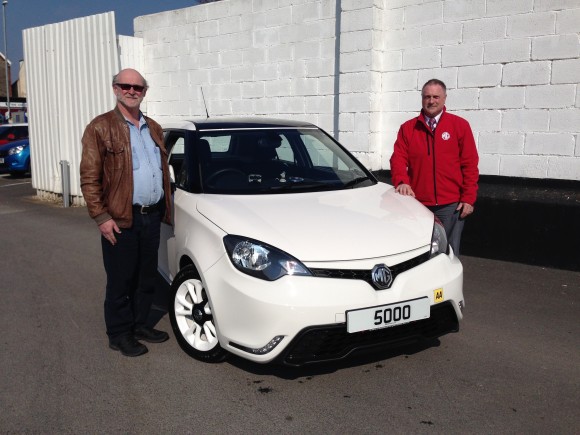 WHILE waiting to go into the Royal Academy of Arts, in London’s Piccadilly, Martyn Watchurst decided to drop in to MG’s flagship showroom – and his decision led to the sale of the 5,000th MG3.

Martyn was immediately taken with the car. He said: ‘I hadn’t seen the new models, so when I spotted the MG3 I thought it looked great and the price was right.’

In fact, was so impressed, he dropped in at Roadworthy in Bristol to take a closer look. Richard Onslow-Carey, a new salesman to the dealership, offered Martyn a test drive. It wasn’t long before he had picked out his car, which happened to be the 5,000th registered MG3 and Richard’s first sale.

Martyn said: ‘I’m so happy with the car; it’s designed really well and comes with a large amount of comfort and specification. I’m due to retire soon and it’s going to be a great little run-around car, particularly when I feel like having a break from my motorbike!’

The popular MG3 supermini launched in 2013 and since then it has been the best-seller for MG.

Matthew Cheyne, head of sales and marketing for MG, said: ‘It’s fantastic to mark the 5,000th sale of this great car and the figure is only going to carry on rising. We are always pleased to hear that people love the MG3 so much. It really is a fantastic car.’

MORE: Fast-growing Vantage Group teams up with the Prince’s Trust