THE curtain is about to go up on the most important automotive event in the European car calendar: the Geneva Motor Show.

Car Dealer has a team of reporters and photographers on the ground in Swiss city – and full coverage of the event will be appearing in issue 85 of the magazine, out a little later in March. For now, though, here is a round-up of some of the highlights that will be wowing the crowds at the automotive extravaganza.

This year’s Geneva show has something of a performance theme to it, with a number of sporty and track models due to be unveiled. And, knowing that it just wouldn’t be the same without them, Ferrari is set to lift the covers off the 488 GTB. Replacing the sublime 458 Italia, this new model is a departure for the prancing horse, being its first modern turbocharged model. The Ferrari faithful may scoff, but with a 0-62mph time of 3.0 seconds and a top speed on the exciting side of 200mph, it’s certainly got our attention.

At the more affordable end of the performance spectrum, Ford is finally set to unveil its new Focus RS hot hatchback. The latest in a model lineage that stretches back for decades, the new RS has been eagerly anticipated by performance car fans due to its blend of performance, practicality and value. This third-generation hot Focus comes with four-wheel-drive for the first time, as well as a host of trick driver aids, which is just as well given its 2.3-litre motor develops a searing 318bhp.

A long-time stalwart of the hot hatchback scene, Honda has been curiously lacking performance cars since the demise of the old Civic Type-R hatchback in 2010. Now, though, the be-winged monster is back. The Japanese brand has been coy in revealing full details, with just a few teaser shots and glimpses in adverts giving the styling away. What we do know is that the car’s turbocharged motor will put out around 300bhp – enough for a top speed of 167mph – and is likely to start from under £30,000.

It seems normal supercars just aren’t enough for the well-heeled car enthusiast any more, as a number of manufacturers are now turning to extreme-performance track-only models to tempt their clientele. Aston Martin is the latest to show its hand with the stunning Vulcan. Eschewing the hybrid trickery of its rivals from Ferrari and McLaren, the Vulcan takes a distinctly old-school approach: huge, naturally-aspirated V12 engine at the front, rear-wheel-drive and a racy sequential gearbox. Just 24 are to be made, each sporting a whopping £1.8million price tag.

The new flagship of the Cayman range, this hardcore, track-biased Porsche is the perfect riposte to those who look down at the sublime Cayman as a ‘soft’ option. Blurring the lines between road and race cars, the GT4 wears an aggressive bodykit for increased downforce, and features a new, larger 3.8-litre six-cylinder motor developing 380bhp. Order books open now, with the first customer cars expected for delivery at the end of March.

Drivers with families haven’t been forgotten in the deluge of mega-horsepower two-seaters. In fact, Volkswagen is to show off a car that will be right up the alley of the performance car enthusiast who has to do the school run in the mornings: the Volkswagen Golf GTD Estate. Combining the practicality of an estate car, the frugality of a turbocharged diesel and the performance potential of the iconic Golf GTI, this 181bhp model could well be all the car anyone could ever need. That’s if you don’t prefer the Focus ST or Seat Leon ST Cupra estates, which the Golf will do battle with, come its showroom debut in April. 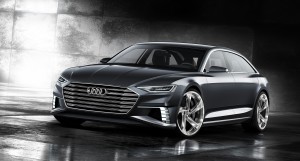 It wouldn’t be a motor show without some outlandish concepts to lust over, and Geneva 2015 is set to be no different. Showcasing Audi’s future design direction is this, the Prologue Avant concept car. The brand has already stolen a march on its competitors in offering stylish and desirable estate cars, and the Prologue shows this is likely to continue. Amongst the design highlights are a new ‘singeframe’ grille and slim-line laser headlights, which will soon be offered on models across the range.

Crossovers, for better or worse, are all the rage at the moment, and Renault – having finally got in on the act with the Captur – is set to reveal its second high-riding model, the Kadjar. Utilising the underpinnings of the highly successful Nissan Qashqai, Renault is hoping to emulate that car’s popularity by offering similar levels of family usefulness in a more stylish package. Expect to see a range of frugal diesel engines and four-wheel-drive on posher models.

Built in a tiny batch of 375 units and with an average sale price of over £1million, you’d think that McLaren’s cutting-edge P1 hypercar would be exclusive enough to satisfy the requirements of even the most demanding car enthusiast. McLaren disagrees, however, and is offering a select band of 35 P1 owners the chance to part with a further £1.9million to add the P1 GTR to their collections. Unfortunately, they won’t ever be able to tack this track-monster on the road. Instead they will be enrolled in McLaren’s driver development programme – just like Jensen – and invited to play with their cars at race tracks across the world.

A svelte, searing-red, shooting-brake estate concept with a Kia badge. Just a few years ago that sentence would have been unbelievable, but such has been the rate of change at the Korean manufacturer, that it now has an enviable reputation for quality, value and style that is putting the wind up its established European rivals. It’s clear to see the confidence the brand has, especially when it’s getting ready to show off a car as stylish as this. The concept points to a forthcoming replacement for the now defunct Optima family car, and we have to say, makes the new Ford Mondeo look positively pedestrian.

MORE: Another record year lies ahead, according to Whatcar.com statistics