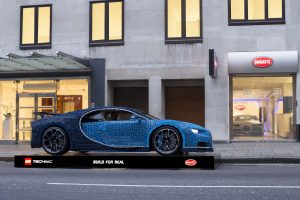 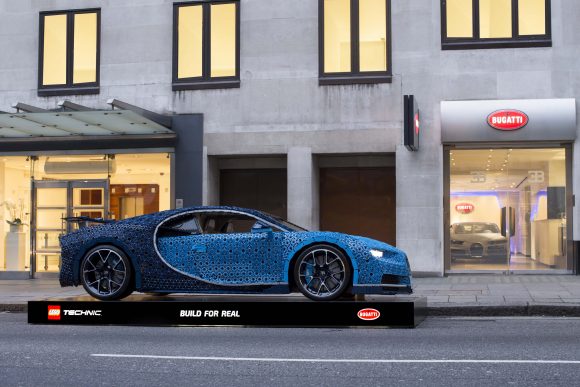 A BUGATTI Chiron created entirely from Lego bricks made its UK debut in London this week.

The driveable model, which is made up of one million individual Lego pieces, was joined at H.R. Owen’s Bugatti dealership in Mayfair by the real deal – an eight-litre W16-engined hypercar.

Though the production Bugatti is capable of hitting a 261mph top speed, its model stablemate delivers a somewhat slower figure of 18mph – partly because of its robust 1.5-tonne weight.

After making its debut, the Lego Chiron will be embarking on a tour of three locations.

Taking more than 13,000 man hours to construct, the Lego Bugatti features a working speedometer built entirely from Lego pieces, and even incorporates a functioning rear spoiler. An incredible 2,304 Lego motors have been used to get the car moving, too.

Lena Dixen, senior vice-president of product and marketing for the Lego Group, said: ‘This life-size model is a first of its kind in so many ways, and with it we wanted to push the boundaries of our own imagination.

‘For over 40 years, Lego Technic has allowed fans of all ages to test their creativity with a building system that challenges them to go beyond just creating new designs – to also engineer new functions. It’s a fascinating example of the Lego Technic building system in action and its potential for creative reinvention.’

There are no plans to put the scale model into production – although those wanting to recreate it could theoretically head to a Lego shop and buy the pieces to make one.

The Lego Bugatti Chiron will be at Westfield London in Shepherd’s Bush on November 1, followed by Westfield Stratford on November 3 and finally Bluewater Shopping Centre at Greenhithe in Kent on November 8.

MORE: New boardroom table to create history of its own at Jack Barclay Bentley