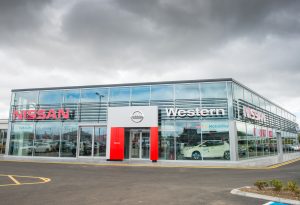 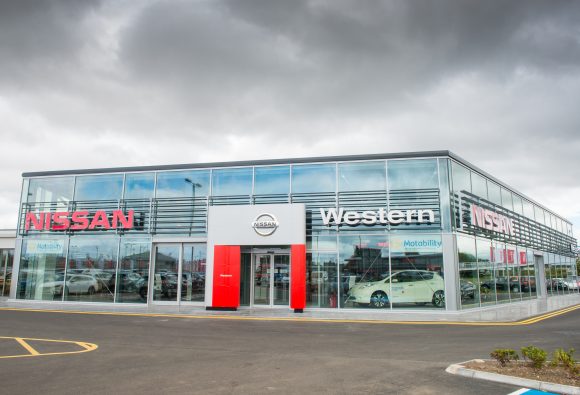 A NEW flagship Nissan dealership for Scotland has been officially opened a stone’s throw from Edinburgh Airport.

Purpose-built at a cost of £6.5 million, Scotland’s biggest Nissan outlet was developed after the thriving dealership outgrew its former site on the city’s Corstorphine Road.

And its opening, alongside Western Nissan’s other sites in Stirling and Dunfermline, has further strengthened the relationship between one of the UK’s fastest growing automotive retail groups and one of its fastest growing car brands.

Employing 100 people – and having created 20 new jobs – the development centres around a stunning 15-car showroom designed to showcase the Nissan range to best effect.

Outside, there’s a huge, Nissan-only forecourt stocking a massive selection of up to 125 quality approved CARED4 used Nissan models.

The site has also been future proofed for predicted growth in aftersales business with a massive 14-bay state-of-the-art workshop with all the very latest Nissan servicing and diagnostic equipment.

Peter Collin, Managing Director of Eastern Western Motor Group, said: ‘We are absolutely delighted to have opened such a fantastic facility that will offer motorists in Edinburgh and West Lothian the very best of the Nissan brand.

‘We are also proud to have strengthened our relationship with Nissan at such an exciting time for the brand and for our group.

‘The opening of this new site completes the development of Edinburgh Luxury Car Village and puts Nissan at the heart of what is now the number one destination for car buyers in this part of Scotland.’

‘As a group our whole ethos is to apply a premium brand mentality to everything we do and as such we aim to excel in customer service, offer the best facilities and look after people in a first class way.’