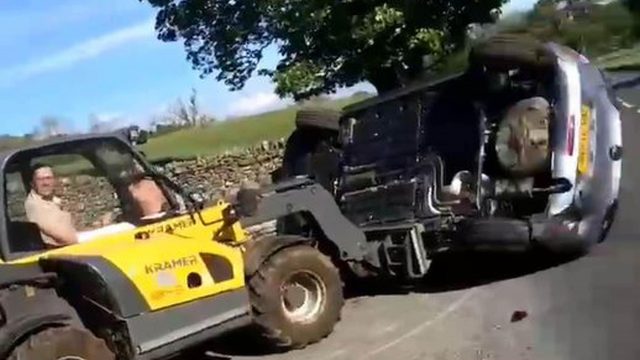 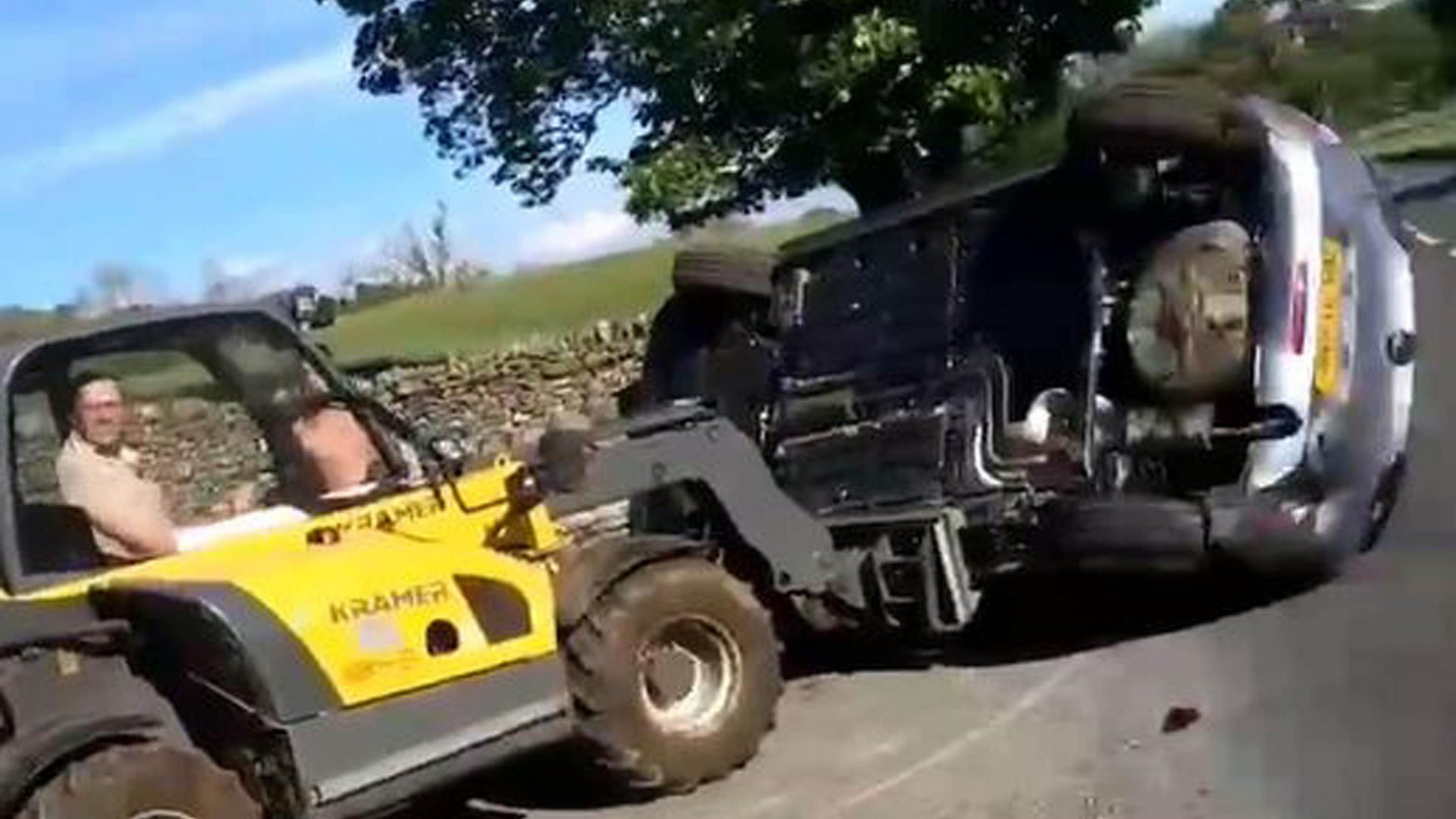 A farmer has been cleared of dangerous driving and criminal damage after he used his tractor to flip a Vertu Motors courtesy car from his land.

Fourth-generation hill farmer Robert Hooper was captured on film using his vehicle’s forklifts to launch the Vauxhall Corsa from his farm in County Durham.

The footage showed him using the telehandler with forks to lift the £16,000 car from the lane outside his farm in and push in on to its side on the road outside.

As a result of the incident, the 57-year-old was charged with dangerous driving and criminal damage but he has now been cleared by a jury.

During a four-day trial at Durham Crown court, the farmer claimed he had been assaulted by one of the car’s passengers,  21-year-old Carlie Burns.

He told the court said he ‘felt threatened’ and successfully argued that ‘an Englishman’s home is his castle’.

The court also heard that Burns, who was shirtless at the time, was knocked to the floor by the tractor after drinking seven bottles of lager.

Hooper hold the jury he was punched by Burns when he first politely asked the men to leave as they were blocking access on what was a busy day on the farm.

He said he was aware of an ‘influx’ of youths visiting the area that summer, causing anti-social behaviour, littering and damaging walls.

The farmer claimed the younger man punched him twice in the farm buggy he was driving, bursting his lip.

Hooper told the court: ‘I thought it is time to get out of there, and I said ‘If you don’t move it, I will’.

‘My mind was racing.

‘I thought we have a bit of a problem here, there’s two of them, half my age, I didn’t know what they had in terms of weapons, or what they were capable of doing.

Taking to Twitter, Vertu boss Robert Forrester confirmed that the Corsa was a courtesy car belonging to the dealer group.

One of our courtesy cars! https://t.co/V4jAq6Mo8j

He added that the car had to be scrapped as a result of the incident.

Hooper said he was defending his property and himself.

He added: ‘I felt threatened and an Englishman’s home is his castle, and my castle starts at that front gate.’

In his closing speech to the jury, Michael Rawlinson, defending, gave the origin of the saying, referring back to the judge Sir Edward Coke’s comments which set legal precedents in 1604.

Referring to arguments about how Mr Hooper could have acted differently that day, Mr Rawlinson also quoted the boxer Mike Tyson, saying: ‘Everyone has a plan until they get punched in the mouth.’

Hooper, who has no previous convictions, had a busy day baling silage and had gone back to the farm for his tea, intending to go out again to carry on working.

Burns had been drinking with friends at Low Force waterfall, and having consumed up to seven bottles of lager he was intending to walk 52 miles back to his home in South Tyneside.

He told the jury that the Corsa had suffered a puncture, which was why they parked on the farmer’s lane.

In his closing remarks, David Ward, prosecuting, described Hooper as ‘utterly irrational’ on the day.