For those looking for a premium performance car, Jaguar’s Special Vehicle Operations has become one of the first ports of call.

Over the past few years it has been working its go-faster magic on various Jaguar Land Rover models, even winning plaudits for turning the firm’s SUVs into cars that will tear up a B-road and make a lot of noise doing it.

The Jaguar F-Pace SVR was one such vehicle, and while the interior felt like a bit of a let down, there’s no denying with those looks and that V8 engine that it’s anything other than desirable.

The latest model is now here, so it’s time to find out if its upgrade for 2021 marks a noticeable improvement over its predecessor.

Reading the updates list, it’s certainly a case of evolution rather than revolution. Jaguar says the new SVR is ‘faster, more agile and more rewarding than ever’, which has come through various changes such as improved braking performance, a new steering system, retuned dampers, more torque and a retuned active rear differential.

Exterior changes are subtle but are said to be motorsport-inspired, resulting in a reduction in lift of 35 per cent.

There are also new LED headlights and taillights, while inside the interior has been given a heavy refresh – we’ve already seen it in the regular F-Pace where it impresses, so this is a welcome change.

There are no surprises under the bonnet, with the F-Pace SVR retaining the traditional SVO 5.0-litre supercharged V8 engine.

Whatever application it finds itself in, this V8 never fails to impress. The extra torque that’s opened up is small but contributes to an angry, brawny engine that surges towards the red line with every push on the throttle. It’s a deep, aggressive engine note, too, which coupled with the car’s generally composed nature gives modern muscle car vibes.

Unsurprisingly, it’s not the most economical. Fuel economy is registered at 23.1mpg while CO2 emissions are 275g/km. 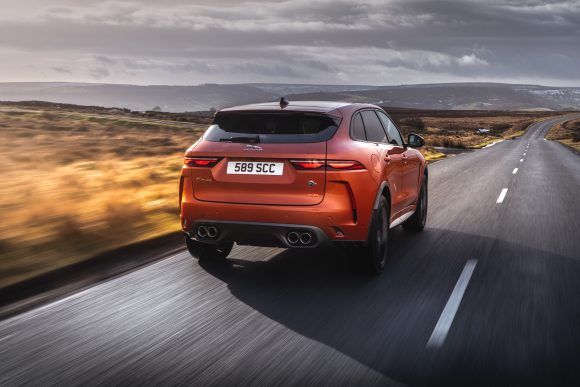 Outright comfort is one of the most noticeable attributes of the SVR from behind the wheel. The cabin is wide and airy, while the lofty driving position gives you a great view of the road ahead.

Though the engine does cackle into life, it quickly fades into the background – until you get a little more enthusiastic with the throttle, that is.

Switch into dynamic mode and the SVR becomes a far different beast, however. Whereas piloting the older car felt akin to a ship in a storm, the new car is a far different affair and allows you to properly attack corners.

You can’t forget that it’s an SUV, mind you – this is still a heavy, large car after all – but the SVR manages to eat up corners at an impressive pace.

It’s hard not to notice the F-Pace out on the road. It’s a handsome looking thing and the SVR only takes this positive attribute further. Though some rivals choose to go over-the-top with their performance models, Jaguar has taken a more subtle approach with the SVR.

Of course, the bonnet vents and flared ‘nostrils’ are hardly what you’d call understated, but they appear well-judged and integrate into the overall design well. The brake cooling ducts tucked in behind the front wheels are a neat touch, and though small, are said to reduce lift by 35 per cent. 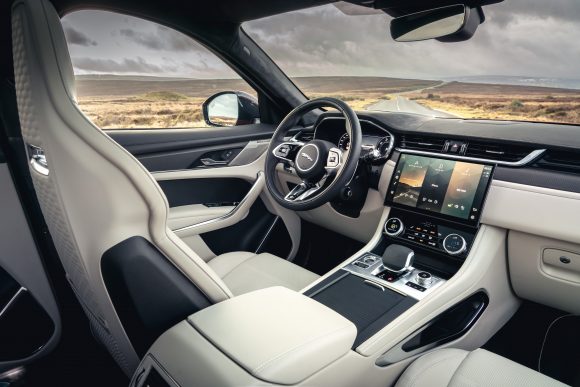 It’s inside where the most noticeable changes have happened. The introduction of JLR’s latest Pivi Pro is a substantial upgrade, bringing an 11.4-inch high-definition touchscreen which stands proud of the main dashboard and above a set of physical buttons. It’s a great mash-up of new-car tech and old-school, physical controls.

The overall perception of quality is by far improved over the older car, while the SVR’s bucket seats with Alcantara inserts are particularly appealing. Another highlight is the SVR-branded gear selector which has a brilliant, high-quality design.

Things are quite easy when it comes to specifications on the SVR – there’s just one. Prices start from £77,595, and this brings an uprated braking system with torque vectoring, as well as go-faster red brake callipers and active all-wheel-drive. A switchable exhaust system allows you to tailor how much of a racket you want the SVR to make, too.

When we first drove the ‘regular’ updated F-Pace, we were struck by the comprehensive cabin upgrades, as well as its improved driving dynamics. Fortunately, these have worked to make the SVR version an even more complete package.

The cabin might transform the experience on the inside, but it’s how the F-Pace drives that really makes it stand out.

It’ll make B-roads exciting, yet calm down when you need it to. If you’re looking for unadulterated fun from your next performance SUV, then the F-Pace SVR makes a serious case for itself.