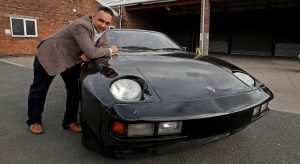 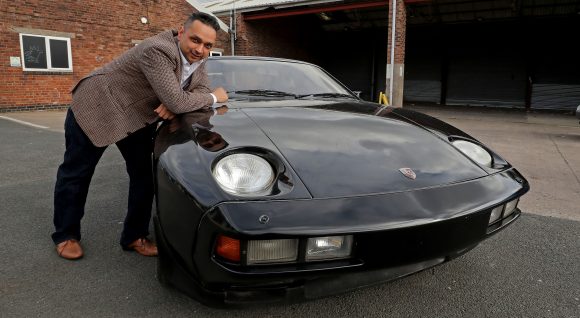 A RARE black Porsche 928 S owned by George Harrison is expected to fetch £20,000 or more when it goes up for auction next month.

The ex-Beatle bought the supercar new in August 1980 from Maltin Car Concessionaires in Henley-on-Thames – the Oxfordshire town where he lived – and owned it for four years.

The coupe is rare in that it is a ‘base’ black colour with black stitching on its leather interior instead of the usual black/red or black/cream combination. It is being sold by Raj Sedha, from Leeds, who bought the car in 2003 – but didn’t realise the significance of its former owner. 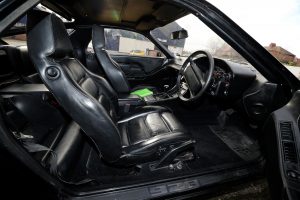 The interior of the Porsche 928 S

He said he got the car – registration JUD 800W – for spare parts but then his wife looked at the paperwork and saw Harrison’s name on the log book.

Sedha, pictured above with the Porsche, said: ‘It didn’t click with me. She said it is George Harrison’s. I said, “That’s who the man who I bought it off said. Who is he?” She said, “He’s the Beatle. You can’t take the car apart for spares.”‘

The 4.7-litre car, which isn’t MOTed but does run, has had some restoration work done on it and is expected to fetch upwards of £20,000 at Omega Auctions’ Beatles-centred sale at its Warrington auction room on March 17.

Auctioneer Paul Fairweather said: ‘For anybody that’s into cars and The Beatles, this is a must-have.

‘The 928 is an absolute classic and the fact that it was owned by George for four years from new will ensure that it roars off the auction block.’

Car enthusiast Harrison, who died of lung cancer in November 2001 at the age of 58, was passionate about motor racing. He went to the Goodwood Festival of Speed, and his song Faster – which appeared on his eponymous 1979 album and was released as a single – was inspired by his friendship with drivers including Jackie Stewart, as well as the time he spent with the 1977 Formula One World Championship series.

MORE: Porsche expects to sell 20,000 units a year of its first all-electric car

On SuperUnleaded.com: Williams F1 Gives Us First Glimpse Of 2017 Car