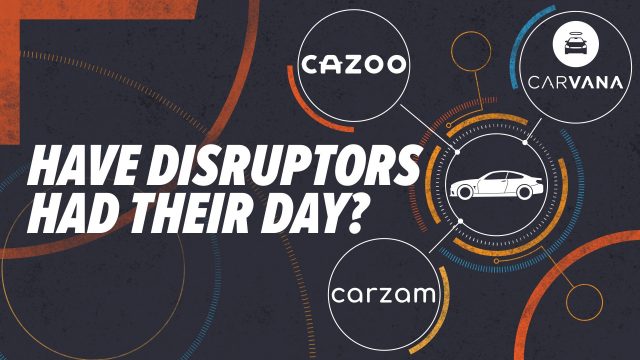 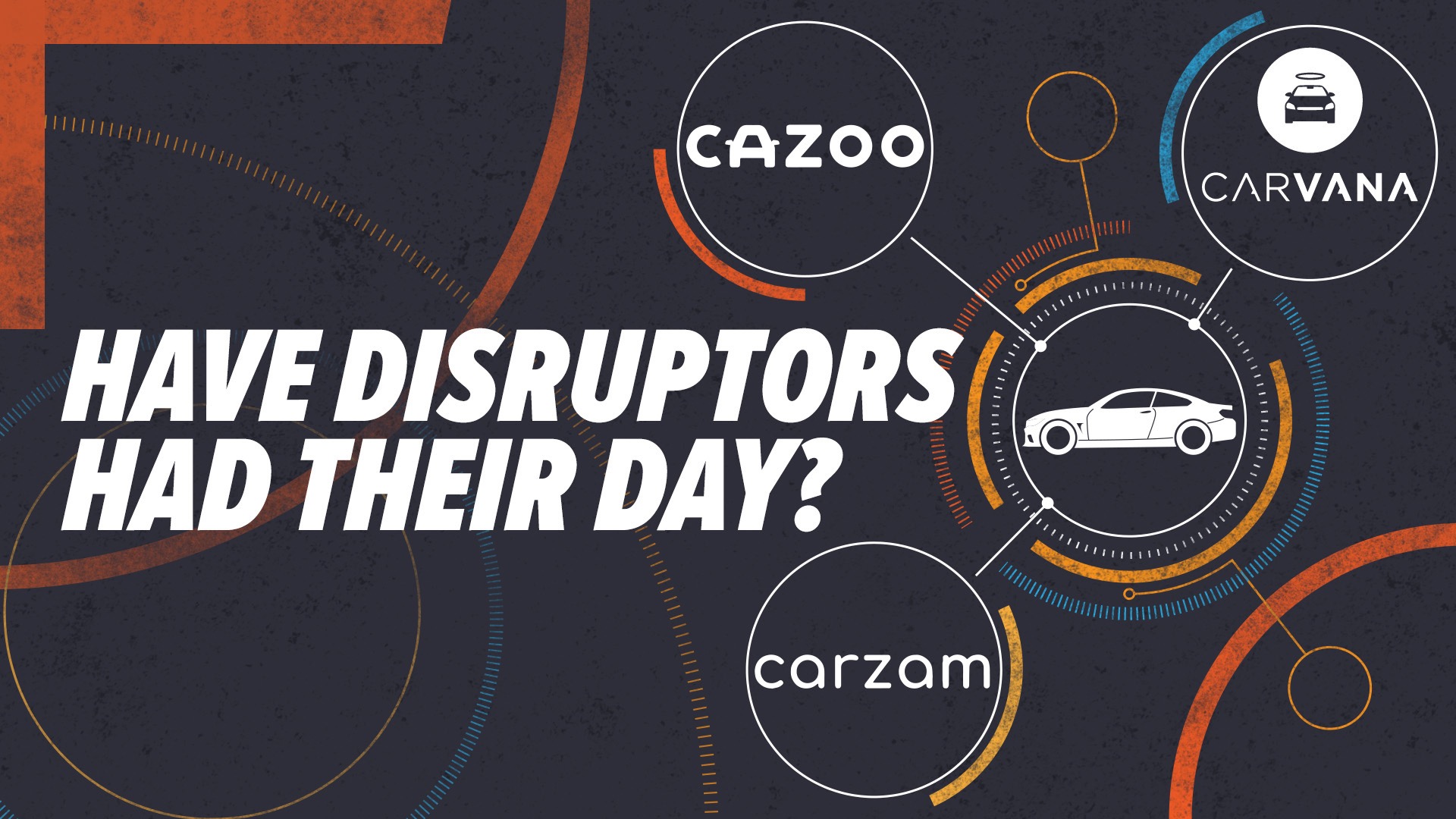 Have online car dealers Cazoo, Cinch and Carzam already had their day?

Are the wheels beginning to fall off the online used car disruptors’ journey? Some motoring experts certainly seem to think so.

As rumours swirl in the national press that Carzam is looking for a buyer and Cazoo’s share price plummets by 82 per cent in nearly six months, the signs don’t exactly look positive.

And it’s not much better in the States, either.

The company is grappling with inflation and interest rate headwinds, falling consumer and investor confidence and a distinct lack of inventory.

Its share price is down 86 per cent in the past six months, too. But is this the end of the road?

‘These “disruptors” aren’t doing anything fundamentally different so I don’t really see them as disruptors at all,’ said Swansway Group director Peter Smyth.

‘Research shows that 75 per cent of used car buyers still want to test-drive the vehicle before they purchase, so I don’t think an online-only approach is viable.’

‘I think that tells you something,’ he said.

‘The omnichannel, bricks-and-clicks combination I think is going to be the proven model in the sector – I think there’s very little doubt about that.’

Those facts backed up what many in the car industry already thought – that traditional dealers with both a showroom and good online sales channels have the advantage.

‘We remain firmly of the view that allowing customers to purchase in a way in which they feel comfortable, using some aspects of the buying journey online for convenience, and dealership visits and test drives for reassurance, will yield the best results,’ said Mike Allen, motor trade analyst at Zeus Capital.

‘Buying used cars direct from the internet is a complex process and not like buying a new clothing item.

‘My view is that consumers want to use “clicks and bricks” to create their own customer journey that suits their needs.’

David Kendrick, a partner at accountancy UHY Hacker Young, agrees a hybrid blend for used car sales is most likely to be the winning formula.

‘I do not believe it is the end of the road for the online model. However, as a business in isolation they seem to be seriously under threat,’ he told Car Dealer.

Kendrick said that with no new car sales for the disruptors to fall back on, the risk of used car depreciation and limited aftersales opportunities, it’s a ‘tough area’ for disruptors to operate in.

Steve Young, managing director of the automotive research firm ICDP, was scathing in his criticism.

‘The primary problem is that they have overpromised and underdelivered, and that is the result of fundamentally underestimating the capabilities of the competition and failing to understand the differences in buying behaviour between a car and other consumer products.

‘The only people to be disrupted by it will be the shareholders who chose to believe a PowerPoint presentation, rather than check out the real opportunity and competition first.’

Cinch is the one online used car dealer that appears to be treading a different path.

The secretive business, owned by the acquisitive Constellation Automotive Group, shares little about its performance.

However, the parent firm has been busy shoring up its supply of used cars with the recently approved takeover of franchised dealer specialist Marshall Motor Group.

With the £325m deal, it has wrapped up the ultimate opportunity to expand its brand with that much-lauded ‘bricks and clicks’ strategy should it want to.

Whether the Cinch name will make it on to dealership sites – as Cazoo did when it bought Imperial Cars and rebranded dealerships as ‘handover centres’ – remains to be seen, but it’s certainly secured the option should it wish to.

Kendrick added: ‘Constellation has it right in my eyes. Omnichannel has to be the way forward, and the industry and consumer isn’t ready for a solely online model.

‘My personal view is that I’m not sure we will ever get to that position.’

Jim Holder, editorial director of consumer brands Autocar and WhatCar? At Haymarket Automotive, predicts the online firms ‘will survive’, but it won’t be an easy ride.

‘I don’t think consumers have fallen out of love with buying cars online – in fact, I think more will buy this way in time, and all our data from in-market car buyers at What Car? supports that,’ he said.

‘But that was always the trend – these brands were just inserted with brilliant timing and huge resources in the midst of a market shift, catalysing it as they pitched in.

‘Now, I think consumers and the markets have realised there is no magic to these brands.’

Holder added that he thinks the online car dealers don’t offer anything ‘radically different’ to the traditional dealerships – and in fact the latter have an advantage with their supporting infrastructure.

‘There’s no significant USP beyond marketing spend and rhetoric to justify the huge levels of hype around them,’ he told Car Dealer.

Traditional used car dealers such as Umesh Samani, boss of Specialist Cars in Stoke and chairman of the Independent Motor Dealers Association, said the industry should actually thank the disruptors for advertising what many dealers were doing already.

‘What the so-called disruptors did – and we must all thank them for – is they advertised the message about buying cars from the comfort of your armchair, and it actually helped the dealers to compete and take business away from them,’ he said.

‘Dealers have adapted quickly and responded to what the customers want and not sat back. But one thing we’ve not done is changed our business model to think it’s all about online and stopped customers viewing, driving and pushed them down the buy-unseen route.

‘Is it the end of them? Not the end, but as it’s already shown, throwing so much money at something doesn’t guarantee a successful business.’

In its most recent financial filings, Cazoo revealed it was making just £124 per unit in the first three months of the year. Vertu, by comparison, made £1,763 on every used car it sold.

Speaking to The Times earlier this month, Chesterman said: ‘I can give you a lot of names that have been hit harder than we have.

‘That is just the nature of investors’ views around high growth and risk today, versus some point in the past or the future.’

He said: ‘Cazoo’s recent market update was astonishing, and the admission it may never achieve profitability was a potentially Gerald Ratner-esque moment.

‘It laid bare the difficulty of the business they are in and the struggle to make it work.

‘That its fortunes contrast so acutely with the incredible profits being reported by the traditional dealers at the moment only rubs salt in the wound – market conditions have never been better, and yet their results sit in direct contrast to the noise around them.’

Dealers think there’s a more ingrained problem with disruptors – that there’s a fundamental lack of understanding of the used car business in their boardrooms.

Swansway franchised dealer group boss Smyth added: ‘In Cazoo’s initial investor presentation from 2020-2024, they stated that their average days to sell in 2020 was 132 and that they were aiming to reduce this to 87 by 2024.

‘It’s highly unlikely that a profit would be made on vehicles you’ve had for over 50 days, so this model seems to be fundamentally flawed.’

‘More concerning for Cazoo than the share price movement would be the current progress against the targets they set out in March last year,’ he commented.

‘In Q1 2022, gross profit per unit fell back and is a fraction of that being earned by the more traditional car retailers.

‘Cazoo needs dramatic growth in both volumes and gross profits during the remainder of 2022 in order to remain on track with their growth targets.’

Watch our in-depth video feature on Cazoo, or listen to it as a special Car Dealer Podcast by searching for ‘Car Dealer Investigations’ on your favourite podcast platform.