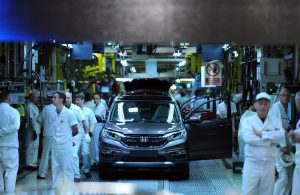 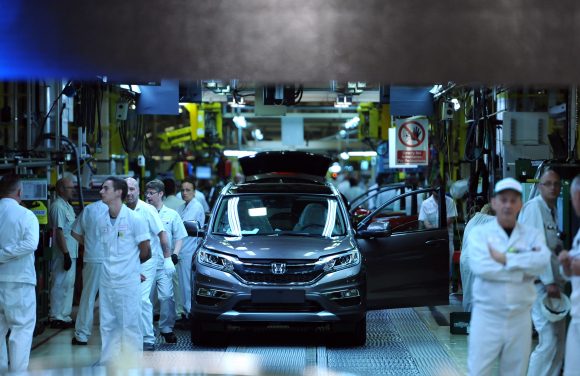 HONDA is planning to close its plant in Swindon with the loss of more than 3,000 jobs.

Local Tory MP Justin Tomlinson confirmed the news, insisting that the decision ‘is based on global trends and not Brexit as all European market production will consolidate in Japan in 2021’.

The Japanese company declined to comment on the announcement which comes less than six months after bosses at the car giant pledged its commitment to the UK.

The company employs about 3,500 people at its plant in Wiltshire, building around 160,000 Honda Civics a year, more than 90 per cent of which were exported to Europe and the US.

Swindon North MP Mr Tomlinson said he and fellow Tory MP Robert Buckland (Swindon South) had spoken to the Business Secretary and the car firm about the decision.

He tweeted: ‘They are clear this is based on global trends and not Brexit as all European market production will consolidate in Japan in 2021.

‘Working with Honda, Gov (led by the Business Secretary), staff and Unions there will be a taskforce set up to provide support for all staff (as we did when jobs were lost previously at Honda).

‘Honda will be consulting with all staff and there is not expected to be any job losses, or changes in production until 2021.’

Last month Honda announced plans for a six-day shutdown to prepare for any Brexit-related disruption.

A company statement at the time said: ‘Honda has been assessing how best to prepare for any disruption caused by logistics and border issues following the UK leaving the EU on March 29.

‘To ensure Honda is well placed to adjust to all possible outcomes, we are planning six non-production days in April.

‘This is to facilitate production recovery activity following any delays at borders on parts.

‘These contingency provisions have been put in place to best mitigate the risk of disruption to production operations at the Swindon factory.’

Speaking in September, Ian Howells, the senior vice-president of Honda Europe, said the company remained ‘right behind’ its production facility in Swindon and was not considering moving the plant out of the UK after Brexit.

He said: ‘The only place we produce the vehicle we produce at Swindon is in Swindon itself. So from that point of view it’s a very big decision to take a different approach.

‘Certainly we are right behind our Swindon approach, and really it hasn’t come up that we would have to look at putting Swindon somewhere else.

‘The logistics of moving a factory the size of Swindon would be huge, and as far as we’re concerned from a European (perspective), and as far as our Japanese head office is concerned, we’re right behind supporting continued production at Swindon and indeed our whole European operation to continue there.

‘In terms of the impact of Brexit, I think we are looking at hopefully relatively short-term disruption as we get used to the new rules and new ways of doing business.’

Honda was the first major Japanese car company to get involved in large scale manufacturing the UK when it did a deal with British Leyland in 1980 to produce Honda-based models in BL factories.

Work began on its own plant at Swindon in 1985.

Swindon voted 55 per cent in favour of Brexit at the referendum in 2016.