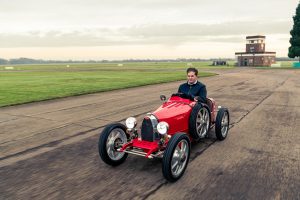 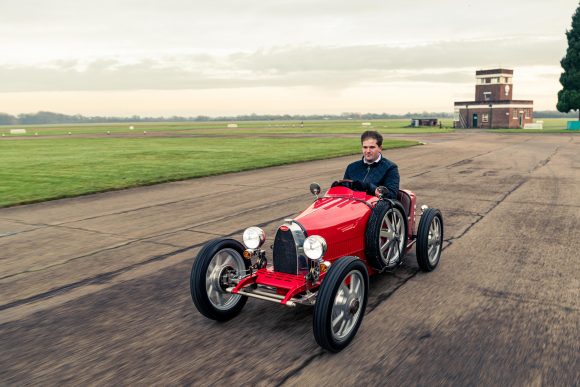 How much do you tend to spend on your children and grandchildren when it comes to gifts? Maybe £50 if they’ve been well behaved?

One doting German chap really pushed the boat out last Christmas and ordered each of his five grandchildren a Bugatti Baby II you see here – costing as much as £50,000 per car.

Scary, right? Those kids must’ve behaved impeccably for the whole of 2020!

It’s essentially a miniature version of the firm’s Type 35, which was the quickest car of its day in the 1920s and is exceptionally valuable today. One sold at auction for $3.3m (circa £2.4m) in 2017, as an example.

The original ‘Baby’ arguably has a better story.

Designed as a one-off toy car for the founder of Bugatti’s eldest child’s fourth birthday, the sports car firm’s discerning customers quickly spotted the model on display while visiting its factory in Molsheim and wanted one of their own.

Five hundred would be produced between 1927 and 1936, and the ‘Baby’ would be reborn in 2019 at the Geneva Motor Show as a slightly oddball way for Bugatti to celebrate its 110th birthday.

A little over 18 months later and here we are with the new car in front of us on a freezing cold December afternoon in Bicester with the Little Car Company – the eccentric firm that’s tasked with creating these miniature cars. 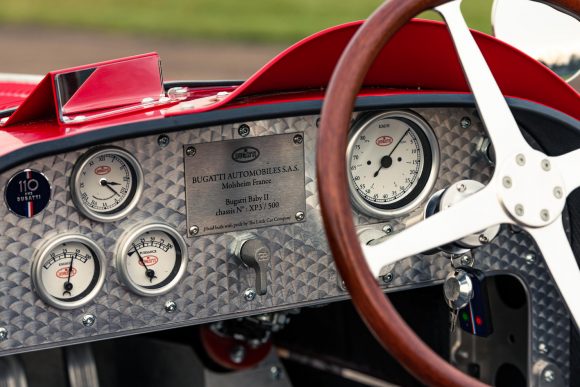 The Baby II’s size is something that’s really hard to gauge in pictures – largely, in part, because of how close it is to the real thing, and at a 75 per cent scale, it’s not as small as you might expect.

In fact, we’re not really allowed to describe it as a ‘toy’ because of its power and the fact that it’s said to be designed for 14-year-olds and over – although we’d hazard a guess that plenty of grandchildren younger than that will be driving it.

And today it’s my turn to see what it’s like.

It might be a challenge to squeeze my 22-year-old legs under the steering wheel, but this Bugatti will be enjoyed by just as many adults who are young at heart as it will children.

It’s also so much more than an off-the-shelf electric toy.

In fact, it’s been engineered with Andy Wallace, Bugatti’s chief test driver for its latest hypercars, while those who have held development roles at some of the UK’s most prominent car makers have also been involved in the project.

Based on a 3D scan of a real Type 35 with replica dials and using parts companies that supply components for the latest 1,500bhp Bugattis, it’s an impressive feat of engineering.

Behind the wheel, you immediately notice the offset camber on the front wheels – just like the original – while the steering offers a surprising amount of feel. 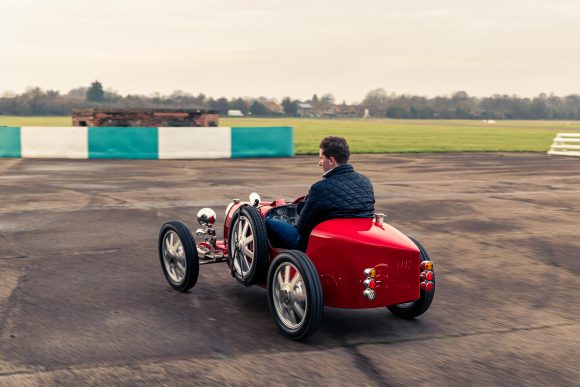 It really does have an astonishing amount of agility, and while I’ve never been lucky enough to drive an original Type 35 – nor do I ever expect to – you can imagine that the owner of the real deal would be impressed by the similarities.

The powertrain won’t be quite so similar, as here you won’t be coughing on petrol fumes, but rather you have a zippy little electric powertrain to play with.

In standard form, it offers a modest 4kW (5bhp), but in high-spec Vitesse and Pur Sang – nameplates used on ‘real’ Bugattis – the power is increased to 10kW (13bhp), while also having a larger battery that allows 31 miles of range.

And the question you’re probably wondering – how fast does it go?

While, like the original, the awkward seating position means you can’t really see the speedo, on paper you can do 42mph – but believe me, it feels quicker like that.

That higher speed is unlocked by a ‘Speed Key’ – an exceptionally cool nod to modern Bugatti Veyrons and Chirons. Here the difference in speed and acceleration is immediately recognisable.

It’s safe to say there are few more enjoyable ways of going round on four wheels and it truly feels raw and involving.

Ben Hadley, chief executive of the Little Car Company, tells us he always conducts a ‘smile test’ on anyone new to driving one, and nobody is yet to return from their first lap without a huge grin on their face.

But who is buying these things? 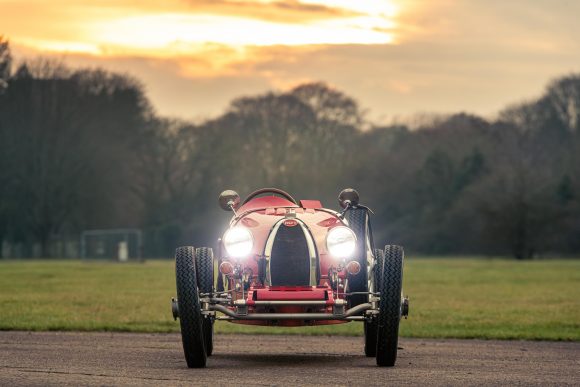 It transpires there are still plenty of interested parties, as around nearly all 500 of this new production run have been accounted for.

We’re told there are some ‘household names’ that are getting one.

Plenty will be sharing a garage with real Bugattis, while some are going to collectors who will never use them – a sad thought. Another is going to a private jet lounge in Dubai. As you do.

Hadley says: ‘We want to bring these classics to a new audience that otherwise wouldn’t be able to afford them or have access. But they have to be as authentic as possible.

‘What we’re all about is making sure that different generations fall in love with driving – I just love the idea of grandparents teaching their kids to drive in one of these.’

Another interesting point raised is about them being EVs. Hadley adds: ‘Ultimately, we want to prove EVs can be fun. If this were powered by an engine from something like a lawnmower it would just be so much worse.’

So what else does the Little Car Company have in store? 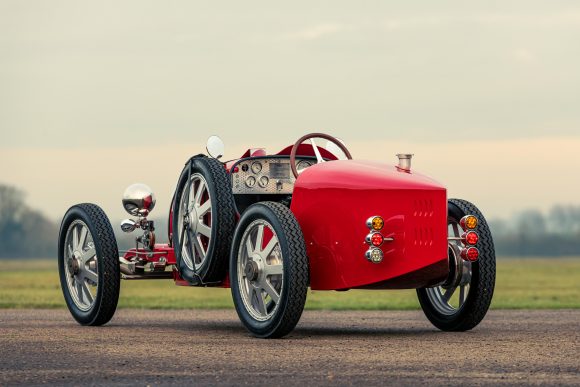 Well, it’s currently building a factory at Bicester Heritage – a cool industrial estate dedicated to everything automotive – and has recently shown off a collaboration with Aston Martin and its iconic DB5.

More manufacturer projects are also in the pipeline.

Little wonder then that many will be sharing a garage with multi-million-pound supercars and real Type 35s.

This feature first appeared in Car Dealer issue 155. For more like it, view the latest edition here