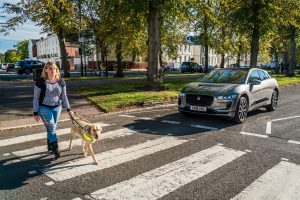 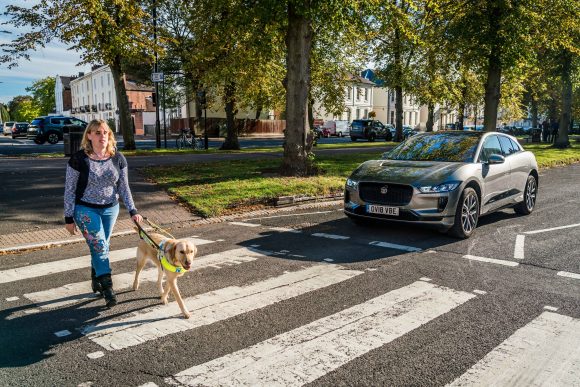 JAGUAR’s all-electric I-Pace SUV may be able to travel over 200 miles on a single charge, but its complete lack of engine noise means it poses a problem to blind or visually impaired people.

To combat the issue, the British car manufacturer has created a unique Audible Vehicle Alert System (AVAS), which produces a sound that can be heard at speeds of up to 12.5mph.

The system exceeds new European legislation which is due to be introduced for all new electric vehicles from July 2019.

The technology, which took four years to develop, was tested by people involved with the Guide Dogs for the Blind organisation. The sound created is clearly audible outside the vehicle yet unnoticeable to those within.

A speaker housed behind the front grille plays the sound which can be heard from all angles, and increases or decreases in pitch and volume according to the car’s speed. It then disengages at higher speed, where wind and tyre noise gives a clear indication of the approaching vehicle.

Iain Suffield, Jaguar technical specialist, said: ‘The absence of a traditional engine noise from electric vehicles creates a problem for vulnerable pedestrians, such as the blind or visually impaired. This is especially true at low speeds in town centres and car parks.

‘We developed the Audible Vehicle Alert System for the I-Pace to ensure the safety of all road users. Our potentially life-saving technology cannot be switched off and as it’s the leading charity for people with sight loss, we are pleased to have the support of Guide Dogs for the Blind to ensure real people are at the heart of our product testing.’

John Welsman of Guide Dogs for the Blind said: ‘There are two million children and adults living in the UK affected by sight loss. That is why we campaigned hard to make it compulsory for quiet vehicles to have sound-generating systems built in and turned on, including when the vehicle is stationary at a pedestrian crossing.

‘We applaud Jaguar for being the first to launch an EV which meets standards before the new legislation even comes in and look forward to working with the company more in the future.’

MORE: ‘Hard Brexit will have horrifying results for us’