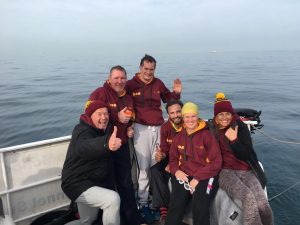 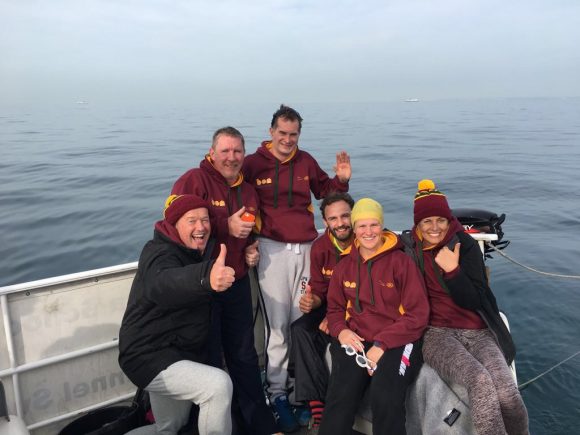 THE Jaguar Land Rover Channel Swim Challenge has raised an impressive £185,000 so far for the not-for-profit automotive industry organisation Ben, smashing the £160,000 target.

Jeremy Hicks, managing director of Jaguar Land Rover UK, swam the English Channel, along with 13 of his colleagues in a two team relay on Thursday 24th August.

The two teams set off at 10pm on Thursday and made it to French soil on Friday, August 25 at around 2.30pm, resulting in a total time of around 16.5 hours to cross the 21 miles stretch.

As part of this, Hicks also challenged his UK retailer network to raise funds for Ben by taking part in their own swim challenges in local swimming pools, as well as the JLR Bike challenge and the JLR Run from Ben HQ to Dover which is taking place on September 14.

The challenge is part of Ben’s second ever Industry Leader Challenge (ILC), which requires an industry leader to achieve a fundraising target over the course of a year, for Ben. Jeremy took up the ILC baton from Daksh Gupta, CEO of Marshall Motor Holdings Plc, and chose the Jaguar Land Rover English Channel Swim Challenge as he felt it was something that would test him physically and mentally whilst also requiring an extraordinary team effort.

Hicks said: ‘My colleagues and I, who took part in the JLR Channel Swim, are beyond grateful to all of our sponsors who have raised an incredible sum of money for a very worthy cause, our industry charity.

‘Swimming the channel was an extraordinary experience and one I won’t ever forget. I have to say that training for the big swim over the past nine months has changed my life and I’m definitely going to keep swimming. Not only has it helped improve my physical health, but also my mental health and wellbeing too. So, watch this space for my next swim challenge! Thanks to everyone who took part in the challenge and supported it, we are very proud of our industry and our industry charity.’

Jools Tait, business development director at Ben, said: ‘We are in absolute awe of Jeremy and all Jaguar Land Rover colleagues who took part in the English Channel swim. It was certainly no easy task as each member of the team trained for around nine months and then had to battle the cold water with no wetsuit to protect them from the elements! We’re also incredibly grateful to everyone at Jaguar Land Rover who took part in the other activities, such as holding a Ben Week, cycle rides and their own swim challenges. We simply can’t thank you and all of the sponsors enough.

‘The funds raised by this epic challenge will help us to reach even more people in the industry, allowing us to provide more practical support to those who need it. Our services are funded entirely – and can only continue – through the generous support of the industry. Fundraising activities such as this are vital in ensuring that we can continue to provide high quality, sustainable support to industry colleagues and their families as they face life’s toughest challenges.’

MORE: JLR MD and dealers to take the plunge for charity Channel swim

On SuperUnleaded.com: Here’s why you don’t use launch control in a car park…