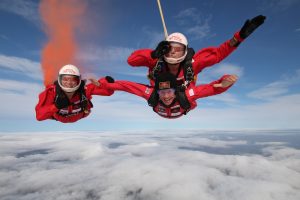 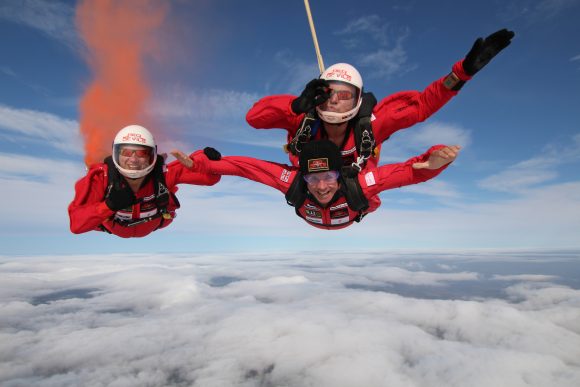 He and elite sports car driver Johnny Mowlem, who is a Lookers ambassador, took to the skies with the Red Devils Parachute Display Team as part of Lookers’ support of the military charity 353.

The organisation, which provides support to members of the military community and their families, was set up in memory of Private Conrad Lewis, who in February 2011 became the 353rd British soldier to lose his life in Afghanistan.

Lookers got involved with 353 as McMinn had a long-standing working relationship with Conrad’s father, Tony, and wanted to offer his support following Conrad’s death. Tony was previously sales director at Nissan Motor (GB) before becoming the managing director of West Way Group.

After a pre-flight induction, McMinn and Mowlem donned the iconic red jumpsuits before taking off from Langar Airport in Nottingham for their epic ascent – and plunge – over the countryside. 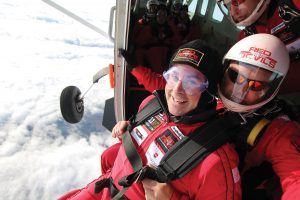 Nigel McMinn (front and centre) prepares to plummet into the clouds

It was the first time that McMinn had done a skydive, and he said: ‘The whole experience was absolutely breathtaking, from the professionalism of the instructors at the Red Devils and preparing for take-off right through to the actual jump itself, which was exhilarating.

‘Of course, there were nerves during the ascent, but they soon disappeared as soon as we jumped out of the plane and the adrenalin kicked in. It was a clear-blue-sky day, so the view we were presented with once we burst through the clouds was spectacular.

‘It’s an experience that will live long in the memory, and the fact that we were able to do it in support of such a worthy cause made it a fantastic day all round.’

Mowlem said: ‘I’m used to getting my adrenalin pumping in the motoring world, but skydiving is something else altogether. It was a fantastic day, which was made extra special by the fact that Nigel was able to join me for the ride. Lookers have done so much for 353, so to be able to help Nigel and everyone at Lookers in this way was the icing on the cake.’

The skydive helped increase the amount that Lookers, which operates from 153 franchised dealerships nationally, has raised for 353 to more than £100,000.

Pictured at top: Nigel McMinn (centre below) flying high with instructors from the Red Devils

MORE: Revenue and profits both up as Lookers delivers ‘excellent’ results