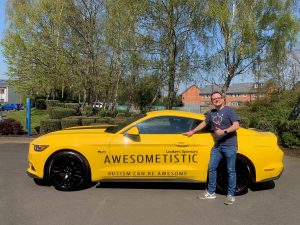 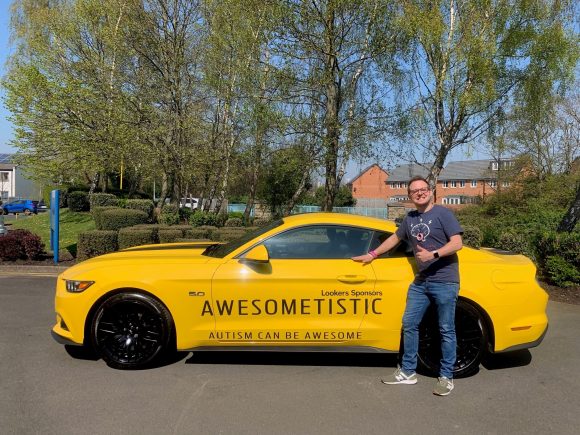 LOOKERS is helping an autism charity get noticed in the north-east after creating a bespoke yellow Ford Mustang to spread the word.

Richard Smith, founder of Awesometistic, is now the proud owner of the head-turning muscle car after he approached Lookers Ford Gateshead to help him increase awareness of the the charity.

Awesometistic, which Richard set up last year, provides support to those living with autism in all its forms. He also advises and educates the wider community about the condition.

Always eager to help members of its local community, Lookers Ford Gateshead was able to provide the classic American car to Richard at a fantastic rate, as well as adding the charity’s logo to the bodywork.

The 35-year-old, who lives with autism himself, is now making an impression right across the north-east, particularly when he visits schools to talk to children about the condition.

Richard said: ‘The idea behind the Mustang was that it’s a very recognisable car, with the yellow colour making it even more distinctive and giving it the look of Bumblebee from Transformers, which the kids love.

‘Pulling up in a car like this helps the children realise that just because someone has autism, it doesn’t mean they can’t enjoy the finer things in life and they can achieve anything they put their minds to.’

Peter Waugh, general manager at Lookers Ford Gateshead, said: ‘We were delighted to be given the chance to support Richard and his fantastic charity Awesometistic, which is doing some great work in our community.

‘Autism is such a multi-faceted condition, affecting people in a variety of different ways. It’s a much-misunderstood subject for many people, which makes work like Richard’s all the more vital. People certainly won’t miss him now when he’s driving by in his yellow Mustang!’

MORE: Ben Garside: Ditch the doom and gloom – here’s how to kickstart the marketplace!