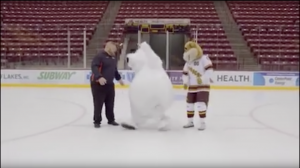 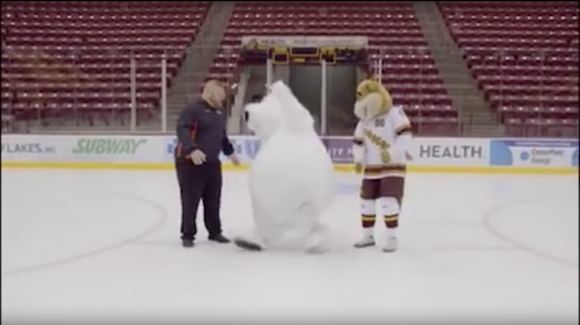 ONE Mitsubishi dealership in the USA has experienced an unusual surge in interest following a promotional video that went a little awry.

White Bear Mitsubishi, of White Bear, Minnesota, came up with the idea to film an advertisement at a local ice hockey rink. The video was to feature the mascots of both the dealership – a man in a polar bear suit – and the Minnesota Golden Gopher hockey team, Goldy Gopher.

While the clip was no problem for Goldy, who is both used to spending time on the ice and was wearing ice hockey skates anyway, the poor chap in the bear costume had a much harder time of it.

Dealership general manager Richard Herod told local news outlet WCCO: ‘The bottom of his feet are kind of like sandals, so you can imagine walking on ice with sandals would be difficult. The irony of the situation is that bears in their natural habitat are meant to walk on ice.’

The outtakes of the advert were released in December and have so far accumulated nearly two million views. You can see the clip below:

MORE: March 2017 will be the biggest car sales month ever

MORE: Kia Sportage is the fastest selling used car of 2016