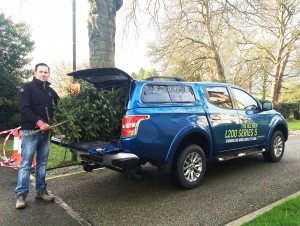 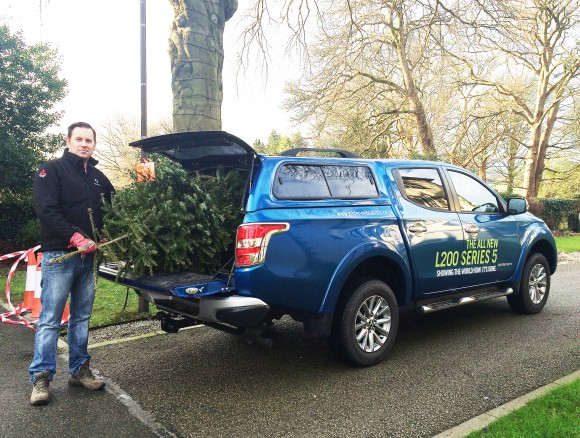 A FAMILY-RUN Mitsubishi dealership in Chesterfield has helped raise more than £1,700 for a hospice by collecting old Christmas trees in return for a donation.

Gilder Mitsubishi, in Tapton Lock, joined other volunteers to collect trees from residents who had registered to support Derbyshire’s Ashgate Hospicecare in Old Brampton.

A total of 158 trees were collected, with Gilder’s sales manager, Daniel Wheeldon, using a Mitsubishi L200 pick-up to drive around the area collecting them.

Daniel, pictured above, said: ‘Ashgate Hospicecare is a long-established and much-loved charity in the Chesterfield area and we will always do what we can to help. It’s fantastic that so many people supported the hospice’s scheme and managed to raise money while getting rid of their Christmas trees. The hospice does incredible and inspirational work and we are happy to have helped.’

The dealership has been an on-going supporter of the hospice since 2014. Last October, staff organised a fancy-dress sponsored walk, which raised £2,700, and in June they provided a support vehicle and 2,000 bottles of water for Ashgate Hospicecare’s Sparkle Night Walk.

The collected trees were taken to the hospice, where they were chipped by CA Landscaping and Tree Services, of Bolsover, which gave its time for free.

Charlotte Gratton, events fundraiser at Ashgate Hospicecare, said: ‘The collection went really well and there was an absolute mountain of trees outside the hospice by the end. It was a massive team effort and we couldn’t have done it without the volunteers. The team at Gilder Mitsubishi are fantastic. They are always happy to support our events and do their utmost and we really value their help. We couldn’t have done it without them.’

On SuperUnleaded.com: Blokey Blokes Head For Test Drives In L200, Get Rides Of Their Lives In Hilarious Prank