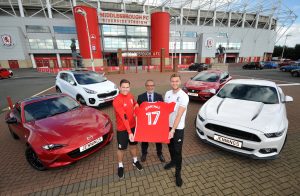 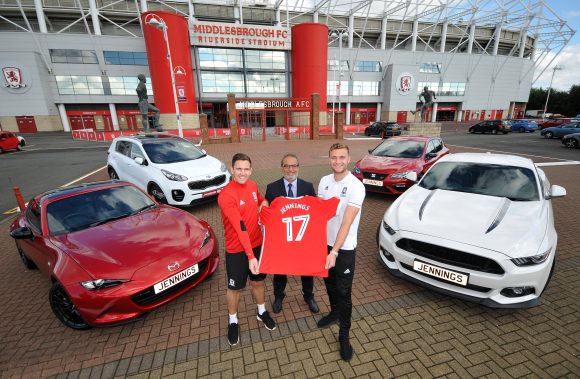 JENNINGS Motor Group has further strengthened its partnership with Middlesbrough Football Club – after pledging its support as a Platinum Partner for the rest of the 2017/18 season.

This is the second consecutive year the motor dealer group – which operates Ford, Ford Direct, Kia, Mazda and Seat car dealerships, in addition to Harley-Davidson sites and a Subway store – has supported the EFL Championship club, after being associated as a Gold Partner throughout last year’s football season.

Although this is the second year the group has supported the club as a business partner, Jennings and Middlesbrough FC have a history stretching back to the late-1980s.

Nas Khan, managing director at Jennings Motor Group, said: ‘We are immensely proud to be associated with Middlesbrough Football Club and to have a history that spans more than three decades.

‘We operate seven dealerships in Teesside and the majority of our staff and customers are avid Middlesbrough fans and supporters.

‘On behalf of Jennings Motor Group, I would like to wish the club every success for the remainder of the season.’

To officially launch this year’s partnership, professional footballers Ben Gibson and Stewart Downing took time out of their busy schedules to meet Khan at the Riverside Stadium, where they presented him with an official Middlesbrough football shirt.

Lee Fryett, the club’s head of partnerships, said: ‘We are delighted to extend our growing relationship with Jennings Motor Group, and look forward to working with Nas and his team over the season to strengthen our links.’