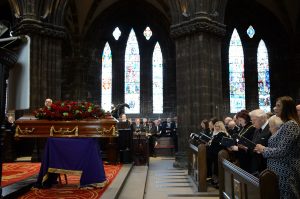 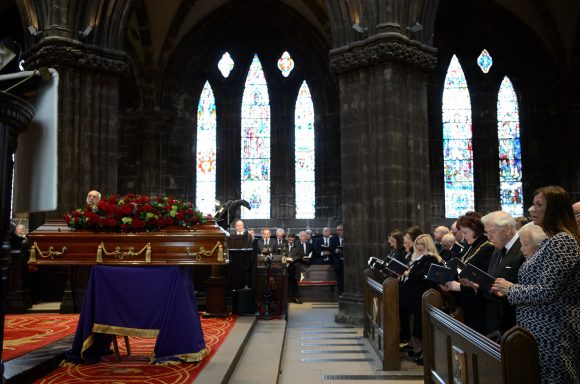 HUNDREDS of family, friends and employees of motoring tycoon Sir Arnold Clark gathered for his funeral at Glasgow Cathedral.

Former first minister Jack McConnell and Glasgow Provost Sadie Docherty were also in attendance to pay their respects to the ‘proud son of Glasgow’, who died on April 10 aged 89.

Many mourners wore Arnold Clark company ties, and buses were put on to bring staff from around the country to the funeral.

The Rev Laurence Whitley led the service, which he said ‘closes a chapter and an era in a life he made his own’. The minister added: ‘The road of his life was a long one and we look back with pride. That driving force now is still.’

Sir Arnold’s coffin was adorned with red roses and yellow daffodils, and was carried inside by family members. His sons John and Adam gave a eulogy, describing how their father started his business by using his RAF demob money in 1965 to buy a Morris Ten Four for £70, which he restored and sold on for a profit.

He soon opened the first Arnold Clark showroom in Glasgow’s Park Road, going on to establish hire car schemes, repair centres, franchises and a car finance and insurance business over the next decades.

Sir Arnold, who was recognised as one of the most successful car dealers in the UK, was knighted in 2004 for services to the motor industry. In 2015, he was presented with the Lifetime Achievement Award at the Car Dealer Used Car Awards, and last year became Britain’s first billionaire car dealer, according to the Sunday Times Rich List.

John said: ‘The iconic black and yellow rear window sticker has become part of the Scottish cultural landscape. If you put all the cars he serviced end to end, they would stretch from Inverness to Paris – and sometimes driving the A9 it looks like somebody is trying to do exactly that.’

Adam said his father enjoyed boats almost as much as cars and was ‘his most relaxed’ at the helm of a yacht and with his beloved wife, Lady Philomena Clark. He added: ‘He knew all his employees by name and if you worked for Arnold Clark, you were one of the family.

‘He would make time to find out how his staff were and what was important to them, and in return he got the absolute best out of everyone.

‘On behalf of our family, we would like to thank all customers and his exceptionally loyal staff, both past and present. Without their exceptional hard work, Dad would not have achieved so much.

‘All Dad’s children were honoured and privileged to have him as a father, and it’s safe to say that he will always be with us through the business that he built up from nothing.’

A private family burial was held in Killearn after last Wednesday’s funeral.

MORE: Arnold Clark is named Employer of the Month for helping youngsters kickstart their careers