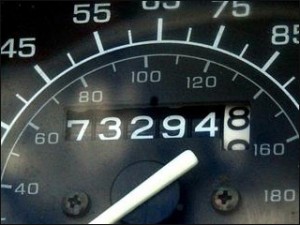 THE National Franchised Dealers Association is calling for the government to do more to tackle the issue of odometer fraud in the UK.

In conjunction with the Retail Motor Industry Federation – the UK’s leading automotive trade body – it has launched a campaign to raise awareness and encourage the outlawing of mileage-adjustment companies in the UK. The campaign also raises concerns over the robustness of the current EU proposal to outlaw mileage-correction companies – of which more than 70 are based in the UK – by 2018, warning that it does not do enough to tackle the growing issue of clocking.

It is estimated that up to 486,000 cars on the UK’s roads could be clocked, costing owners an estimated £580m per year, but while clocking itself is not illegal, the practice of selling a clocked vehicle to someone without notifying them that the odometer has been altered is.

Clocking is the practice of altering a vehicle’s odometer to show a lower mileage than that actually travelled, thereby increasing the resale value of the vehicle.

The NFDA is calling for the government to outlaw all forms of clocking and to help consumers understand the signs and effects of odometer fraud.

Clocking is not only economically damaging but a serious safety issue as well, says the NFDA. Vehicles can remain unserviced for longer periods of time, as their mileage readings are lower and so appear to have undergone less use. The NFDA warns that when a vehicle is left unserviced, the results can be devastating and shouldn’t be considered lightly.

Clocking is thought to be on the rise, partly because of the popularity of PCP finance plans, which carry agreed mileage limits. Accordingly to industry statistics, a buyer could pay more than £2,000 over the real value for a five-door 2006 VW Golf Hatchback 1.9 TDI S that has been clocked from 120,000 miles to just 40,000 miles.

Sue Robinson, director of the NFDA, said: ‘After many years of the NFDA and other trade bodies lobbying for regulation against odometer clocking, it is time for something to change.

‘Hundreds of thousands of people have fallen foul of scams involving clocked vehicles, which, according to the Office of Fair Trading, is costing the motoring industry more than £100m a year and resulting in unnecessary dangers on the road.

‘Simply outlawing mileage-correction companies by 2018 is not enough. In those three years, thousands more cars will be clocked, hugely compromising the safety of cars on UK roads. A mileage-adjustment company is not necessarily the only route for someone who wants to alter their vehicle’s mileage, so a broader zero-tolerance stance must be adopted.

‘Often, when people think of clocking they get images of Swiss Toni-like car salesmen and suspicious second-hand cars, whereas in reality the problem is much more widespread, with people from all walks of life engaging in the practice.

‘Clocking is actually a growing issue and needs to be recognised as a serious crime due to the safety implications it poses to road users.’

MORE: The most extreme car showroom ever?

On SuperUnleaded.com: Mercedes Gets A (Golf) Clubbing