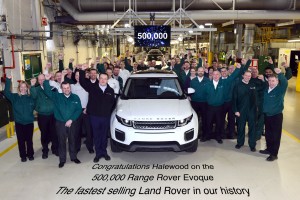 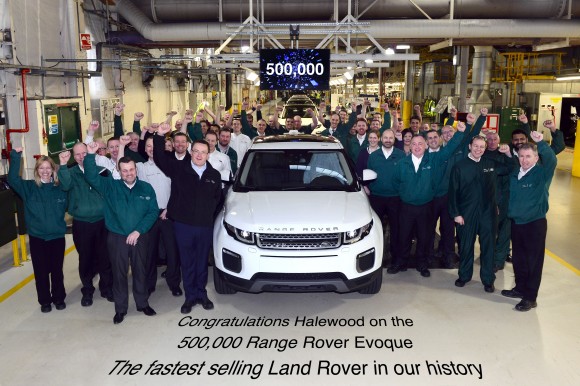 LAND ROVER is celebrating the production of its 500,000th Range Rover Evoque at its factory in Halewood, Merseyside, only four years after deliveries of the luxury compact SUV commenced.

The Evoque is the fastest-selling and most successful Land Rover ever produced, having become the quickest to reach the half-a-million vehicle production landmark.

One in every three Land Rovers sold around the world is an Evoque and strong global demand ensures the production line at Halewood is in operation 24 hours a day, with a new vehicle coming off the line every 80 seconds.

Gerry McGovern, chief design Officer of Land Rover, said: ‘Evoque has been a huge success for Land Rover winning more than 165 international awards, bringing new customers to the brand and evolving to stay ahead of the competition. With our bold new Evoque Convertible we have broadened the range and will attract even more new customers.’

The launch of the Evoque marked a major milestone in the transformation of the fortunes of the Halewood manufacturing plant, which welcomed a £250m of investment to bring the model to market. Its arrival at the site saw the plant’s workforce treble and production quadruple in just four years.

The new Evoque Convertible made its world debut at the Los Angeles Motor Show in November 2015. When it goes on sale from spring 2016, it will be the only luxury compact SUV convertible in the world.

Richard Else, operations director, Halewood, added: ‘The Range Rover Evoque has been a fantastic success for Halewood and for Jaguar Land Rover. We are very proud of our award-winning SUV and we are looking forward to welcoming the new Evoque Convertible to Halewood very soon.’

First UK customer deliveries of the new Evoque Convertible will be in June this year with prices starting from £47,500 for the HSE Dynamic.

MORE: Revealed: How consumers are selling their cars