Renault has sold its majority stake in Russian car brand Lada for just one rouble.

The French car manufacturer is exiting Russia and has agreed to sell its 68 per cent share of AvtoVaz – Lada’s parent company – to the state-run Central Research and Development Automobile and Engine Institute, known as NAMI.

The deal amounts to a symbolic one rouble, or just over one penny, but does give Renault a six-year option to buy its share back, giving the carmaker an opportunity to return in the future.

The mayor of the Russian capital Sergei Sobyanin said the city would bring back the Moskvich brand for cars made at the factory.

It marks the first major nationalisation of a foreign business since the war in Ukraine began.

Renault’s other Russia operations, primarily a factory in Moscow, will be sold to the Moscow city government.

Moskvich was a major car brand in the Soviet Union but went into steep decline in the 1990s and vanished from the market in the early 2000s.

‘Today, we have taken a difficult but necessary decision,’ Renault chief executive Luca de Meo said in a statement, ‘and we are making a responsible choice towards our 45,000 employees in Russia, while preserving the group’s performance and our ability to return to the country in the future, in a different context.’

Renault did not give any financial details of its sales but said the deal included an option to buy back the Avtovaz stake in the next six years.

Selling gets Renault out of a bind that western companies are facing as they determine whether to pull out of Russia and weather the hit to their income.

But continuing to work in Russia after the invasion could risk damaging corporations’ reputations with customers.

With an eye on avoiding unemployment, the Russian government has been urging reluctant foreign investors to either resume operations or sell to someone who will. 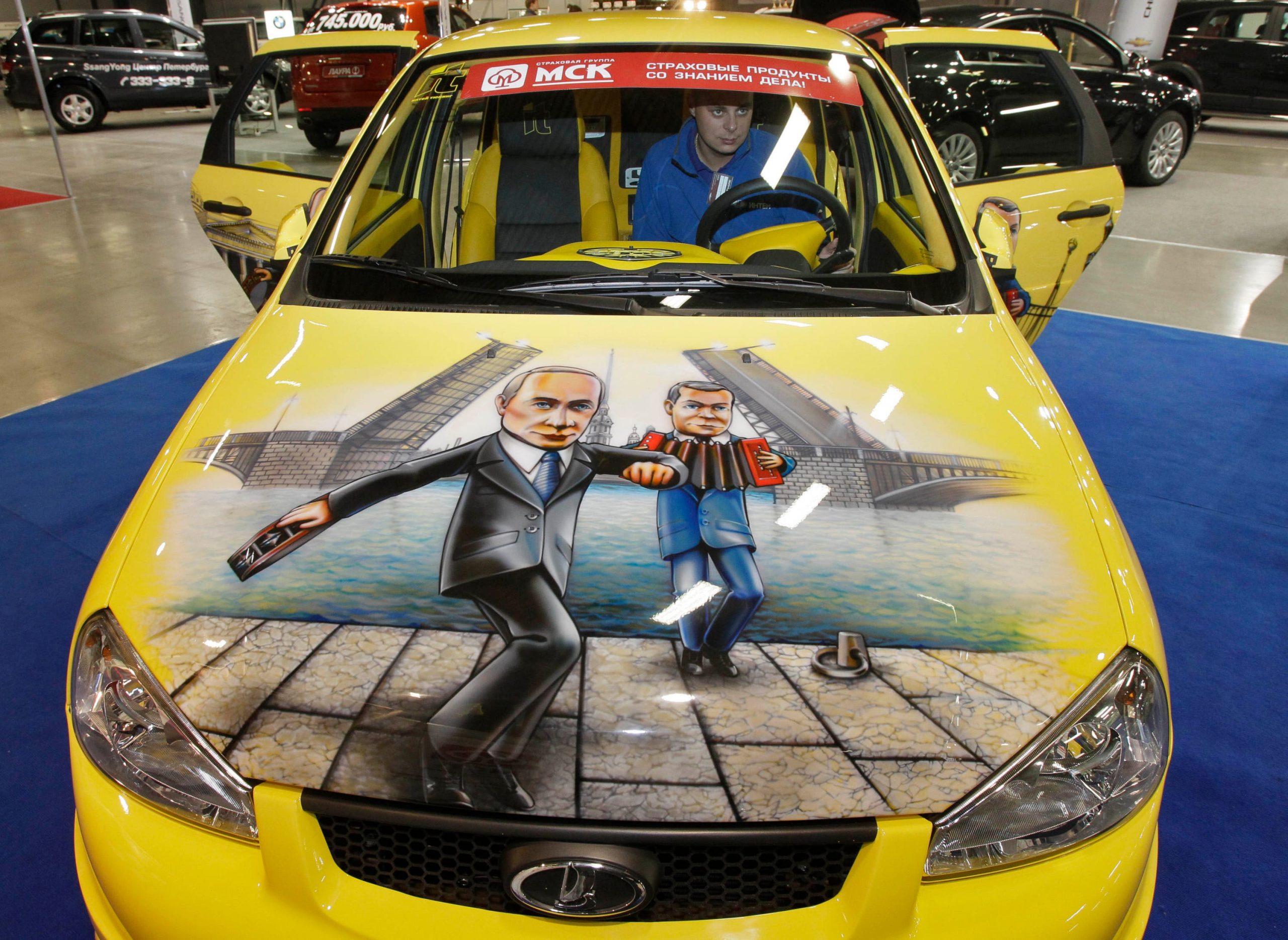 A man sits in a Russian-made Lada Kalina with a depiction of Vladimir Putin, left, and Dmitri Medvedev painted on the bonnet, during an exhibition in St Petersburg in 2011 (AP)

Renault’s announcement came the same day McDonald’s said it is moving to sell its Russian business, which includes 850 restaurants that employ 62,000 people.

The fast food giant did not name a prospective Russian buyer but said it would seek one that will hire its workers and pay them until the sale closes.

The new Russian owners taking over Renault’s operations will have to grapple with a shortage of imported components for cars, especially electronics.

As reported by Car Dealer last week, the Russian car-making sector is heavily dependent on international supply chains that have been disrupted by sanctions over the war, while getting deliveries from abroad has become more difficult and expensive.

The NAMI research institute has some experience developing luxury cars used by Russian leaders, including president Vladimir Putin, but on a much smaller scale than the sprawling Soviet-era Avtovaz plant, where Russian and foreign investors have for decades struggled to make mass-market cars profitably.

Nearly half a million vehicles were sold in Russia last year under Renault and Avtovaz brands.

Sobyanin outlined ambitious plans for the resurrected Moskvich brand on his blog, saying it would start with traditional engines but produce ‘in the future, electric cars’, in a partnership with Russian truck manufacturer Kamaz.

He said the city was motivated by keeping jobs but stopped short of ruling out staff cuts, saying only that ‘we will try to keep the majority of the personnel working directly at the plant and for its subcontractors’.