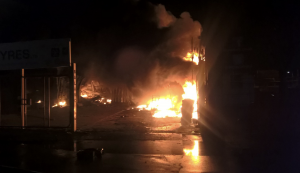 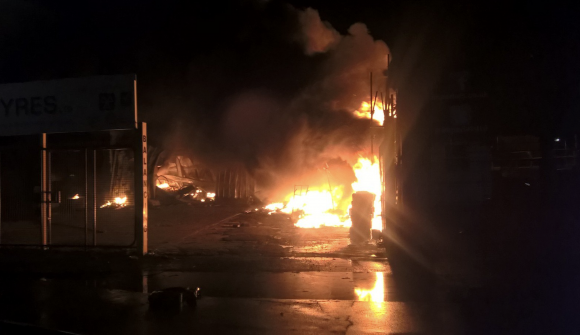 FIREFIGHTERS tackled a huge blaze at a car dealership in east London over the weekend.

Imperials, on the High Road in Chadwell Heath, Romford, had its showroom, an adjoining warehouse and seven vehicles seriously damaged by the fire.

Firefighters will be damping down the hotspots at the car dealership fire on the High Rd, Chadwell Heath, for a number of hours this morning. The fire is
still producing a lot of smoke and local road closures are in place so avoid
the area if you can. https://t.co/NoigtoxrMP pic.twitter.com/35MYFCIXns

At the height of the blaze, which happened on Saturday night, 125 firefighters were in attendance at the prestige dealership. Some parked cars, a large pile of tyres and the warehouse were alight but there were no reports of any injuries.

The London Fire Brigade took several calls from people alerting them to the incident, which was visible from some distance away.

A number of nearby residents were evacuated as a precaution.

Assistant commissioner Graham Ellis, who was at the scene, said: ‘In the early stages of this fire, quick-thinking firefighters were able to make the area safe enough for around 40 cars to be driven out of harm’s way.

The car dealership fire on the High Rd #ChadwellHeath is now under control. Crews are damping down hotspots but the area is still very smoky. Please avoid if you can.https://t.co/NoigtoxrMP pic.twitter.com/S90knUtv60

‘This stopped them being an explosion risk but it also saved many thousands of pounds’ worth of vehicle damage. They also removed a number of cylinders which can explode when exposed to heat.

‘The fire spread to a pile of tyres which created a lot of thick black smoke and we advised local residents to avoid the area and keep windows and doors shut.

‘The combination of cars, cylinders, petrol, tyres and a lot of thick smoke made this a very difficult fire to tackle. Our crews did a good job from preventing the fire from spreading beyond the car dealership.’