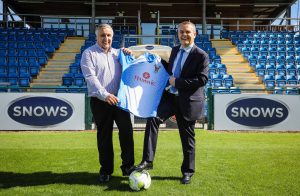 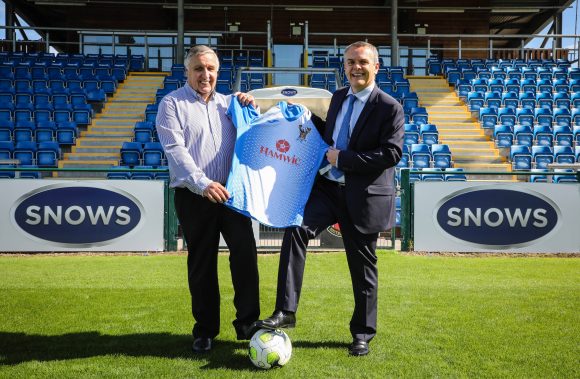 The deal, for an undisclosed amount, will see the club’s 350-seat Testwood Stadium in Salisbury Road renamed The Snows Stadium and includes naming rights and branding at the 3,500-capacity ground.

AFC Totton – known as The Stags – play in the Bet Victor Southern League Division One South. The ground is also home to Southampton FC Women.

Snows chairman Stephen Snow, pictured right, said: ‘We are pleased to partner with AFC Totton as the club begins a period of exciting growth and development.

‘AFC Totton has ambitious plans to become a community hub, providing a range of new facilities aimed at engaging the community in grass-roots football and promoting health and education.

‘The club’s heritage and strong reputation are an excellent match for Snows – itself a locally based and family-owned company with 50-plus years’ experience serving its communities.’

Stags chairman Wayne Mew, left, also welcomed the partnership, saying: ‘AFC Totton is delighted to have teamed up with Snows as our new stadium sponsor.

‘Although the initial sponsorship agreement is for four years, we hope this will be the beginning of a lasting relationship that will bring many benefits to both parties.’

Snows achieved £370m of revenues in 2018. Its 50 dealerships cover 19 brands, from 29 locations across southern England.