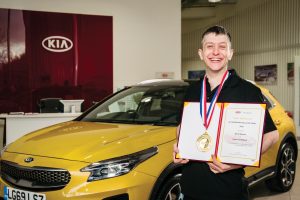 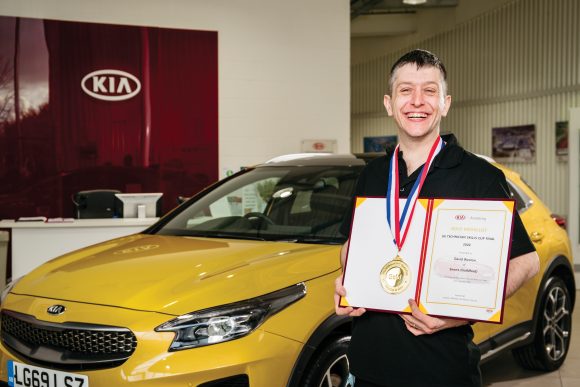 A SNOWS motor technician is preparing to represent the UK at the Kia Skill World Cup in June.

David Weston, of Snows Kia Guildford, will be the only Briton among 60 contestants from more than 40 countries tackling four days of intensive written and practical testing at the Osan Training Centre in Seoul.

He qualified after winning gold in this year’s Kia UK Skill Cup, held at the Kia Academy in Nottingham last month.

The self-confessed ‘motor junkie’ joined family-owned Snows in 2015 after 18 years with an independent garage where he trained as an apprentice.

‘I’m still reeling a little from winning a place at the world cup. When I heard I was going, I was beyond ecstatic and pretty emotional,’ said the 38-year-old.

‘I never would have dreamt I would be doing things like this when I first started out as an apprentice. But since joining Snows I have been actively encouraged and supported to aim as high as possible – and I’ve really gone for it.

‘I get a real buzz out of the practical tests, which usually involve locating seemingly impossible-to-trace faults, and it’s very likely there will be a surprise or two – in February at the UK cup we had to build a seat heater from literally a bag of bits.

‘But now I’ve got my head around the calibre of the people I will be up against, I’m definitely going out there to win the title of the world’s top Kia technician.’

The Kia World Skill Cup is held every two years and competitors enjoy a sightseeing tour of Seoul during the trip.

‘Nothing would make me more proud than to bring the title back to Snows Kia Guildford and the whole team here,’ added Weston. ‘They are all so supportive and I know they are right behind me.’

Derek Lewis, Snows Kia Guildford aftersales manager, said: ‘We are delighted for David, as all his terrific efforts have paid off.

‘Not only does he have exceptional technical knowledge, his customer skills and teamwork are of the highest standard.

‘We will all be willing him to bring the world title home for Snows and the UK.’

MORE: Snows hails Greg Jones as its Manager of the Year