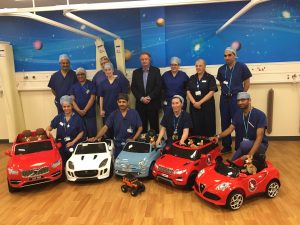 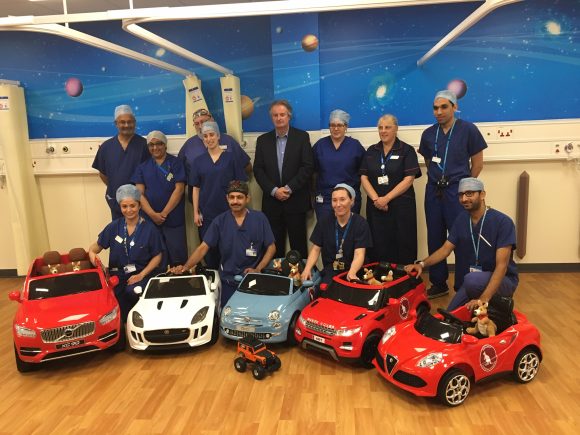 CHILDREN’S journeys to surgery in Leicester have become a lot easier thanks to Sturgess Motor Group.

‘We do everything we can to make the journey from the ward to the theatre as comfortable as possible, but sometimes the experience can unnerve the most confident person. We wanted to think of ways that would make the trip more enjoyable for the younger children.’

Theatre practitioner Helen Shaw said: ‘As a team, we decided instead of doing Secret Santa we would all chip in and buy our patients a ride-on car to take them from reception to the operating theatre.

‘This is something that was done in the past but, like a lot of things, once the car broke there wasn’t money to replace it.’

As such, the motor group was asked if it could help with the venture.

Sturgess, pictured with hospital staff and the cars, said: ‘The Children’s Hospital theatres at Leicester Royal Infirmary have taken care of members of the Sturgess family, and this was our way we felt that we could give back.

‘It was an honour to deliver these five electric cars to the children in an attempt to make their experience less daunting while going to the operating theatre.’

Members of the team and children saw not just one but six electric cars, including a remote-control Land Rover Defender. The ride-on cars delivered were a Fiat 500, Alfa Romeo 4C, Volvo XC90, Jaguar F-Type and Range Rover.

MORE: The top 200 most influential dealers on social media