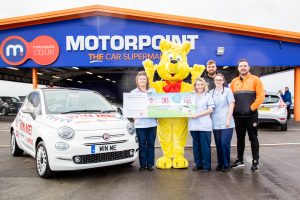 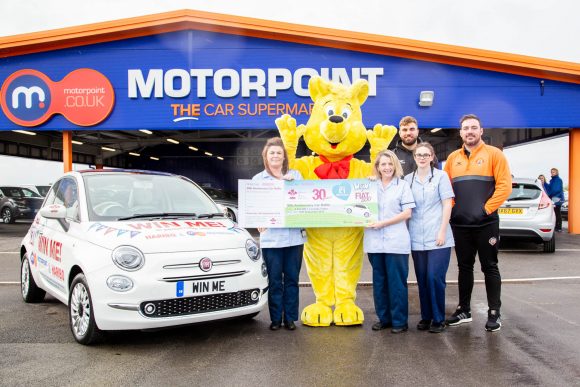 MOTORPOINT has teamed up with Haribo to give away a new car to mark the 30th anniversary of a hospice.

Representatives of the independent car retailer, which has a branch in Castleford, West Yorkshire, were joined by Haribo to hand over the keys to a Fiat 500 1.2 Lounge worth over £10,000 to the Prince of Wales Hospice which is in nearby Pontefract.

It will be used as a prize which one lucky member of public will win via the hospice’s special 30th anniversary raffle.

The car was revealed by nurses from the hospice together with players Grant Millington and Mike McMeeken from Castleford Tigers and the Haribo Gold Bear mascot.

Raffle tickets cost £1 and will be available to purchase in person from the hospice’s shops in the region. The winning ticket will be drawn on September 18.

The Prince of Wales Hospice has provided palliative care and support to thousands of patients with life-limiting illnesses from its base at Halfpenny Lane in Pontefract since 1989. Motorpoint has raised almost £20,000 for the charity in the last two years.

Mick Martin-Roebuck, general manager of Motorpoint Castleford, explained: ‘We are delighted to be able to team up with Haribo, a fellow hospice partner, to support the Prince of Wales Hospice’s 30th anniversary celebrations.

‘We are confident that the car will prove a big draw to the public and we are hoping it will raise at least £30,000 in raffle ticket sales for the hospice over the coming weeks and months.’