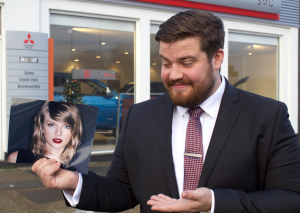 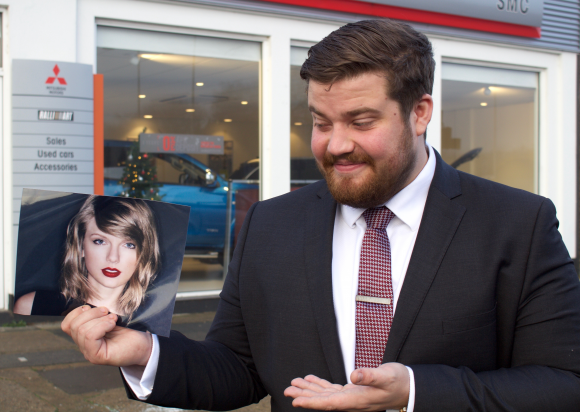 Taylor Swift is Christmas number one at Mitsubishi dealership

TAYLOR Swift is the 2016 Christmas Number One — for an Uxbridge Mitsubishi dealership.

Sharing the same name as the worldwide songstress — and with birthdays spookily only four days apart — Taylor Swift is SMC Mitsubishi’s top salesman, and is as much of a hit-maker as the famous singer.

Swift, 23, has worked for SMC on Long Lane, Hillingdon, for just over two years.

He said: ‘It’s kind of a running joke about my name being exactly the same as one of the world’s most famous female singers. But there’s no Bad Blood.

‘People do remind me often of it, as if I don’t know! It’s always said with a smile though, so I don’t mind.

Sales manager Mike Dickinson said: ‘Taylor is a huge hit with the customers, thanks to his friendly nature and attention to detail. He cares so much about customer service and it shows, with a lot of repeat customers and glowing feedback. It’s no surprise he’s our Christmas Number One.’

He added: ‘It is quite funny that he has the same name as the singer, but it’s not like he can Shake It Off!’

On SuperUnleaded.com: If Santa Had To Drive Cars Across The Globe, Here’s What He’d Drive